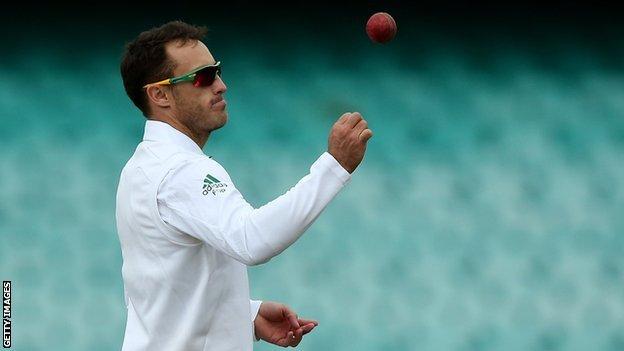 Television replays showed Du Plessis, 29, rubbing the ball over a zip on his trousers on day three of South Africa's second Test against Pakistan in Dubai.

Du Plessis pleaded guilty to an ICC Code of Conduct offence relating to "changing the condition of the ball".

The umpires were forced to change the ball, and applied a five-run penalty.

South Africa went on to win the Test by an innings and 92 runs to tie the series 1-1.

Match referee David Boon confirmed the decision to fine Du Plessis, who bowls leg-spin, in an ICC statement for breaching Law 42.3 of the Laws of Cricket,

Boon said: "I am satisfied that the player's actions warranted the umpires applying the ICC Test Match Playing Conditions.

"It is unfair for anyone to rub the ball on the ground for any reason, to interfere with any of the seams or the surface of the ball, to use any implement, or to take any other action whatsoever which is likely to alter the condition of the ball, except as permitted in (a) above."

"That includes the laying of a charge under the ICC Code of Conduct against Mr du Plessis in respect of changing the condition of the ball.

"After discussions with Mr du Plessis, he has elected not to contest that charge.

"I am also satisfied that this was not part of a deliberate and/or prolonged attempt to unfairly manipulate the condition of the ball, and that the imposition of a fine of 50% of his match fee is appropriate considering the circumstances."

The last time a five-run penalty was issued for ball tampering was during the 2006 Oval Test between England and Pakistan, when the tourists were adjudged the guilty party.

Pakistan captain Inzamam-ul-Haq reacted angrily and decided not to continue the Test in protest.

Altering the condition of the ball is a level two offence under the ICC's Code of Conduct, which carries a penalty of 50-100% of their match fee and/or suspension from one Test or two one-day internationals for a first offence.