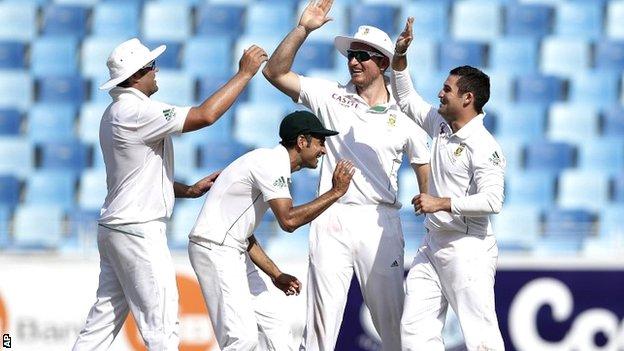 South Africa completed victory by an innings and 92 runs in the second Test against Pakistan to tie the series 1-1.

The win preserved the tourists' seven-year unbeaten away record in series.

Pakistan, awarded five runs after Faf du Plessis was penalised for ball-tampering, resumed 286 runs behind on 132-4 but Asad Shafiq (130) gave them hope with his fourth Test hundred.

He shared 197 with Misbah-ul Haq but was last out in a total of 326, with the injured Zulfiqar Babar not batting.

The fifth-wicket partnership was broken shortly before tea by part-time slow left-armer Dean Elgar in his second over.

Misbah, who had slog-swept leg-spinner Imran Tahir for six over mid-wicket en route to his 22nd Test fifty, attempted a similarly aggressive stroke at a flighted delivery but edged to Jacques Kallis at slip.

Shafiq batted for seven hours and hit 15 fours and a six in a 320-ball innings, improving on his highest score of 111 made against the same opposition in Cape Town earlier this year.

He was stumped after advancing down the pitch to a quicker, wider ball that gave spinner JP Duminy his third wicket. Tahir also finished with three.

Drawing the series against the top-ranked team took Pakistan ahead of Australia and into fourth place in the list, while South Africa, who lost by seven wickets in the opening match, are now unbeaten in 10 series on their travels, their last defeat coming in Sri Lanka in July 2006.

The two teams now play a five-match one-day series, the first of which will be in Sharjah on Wednesday, and will also contest two Twenty20 internationals.