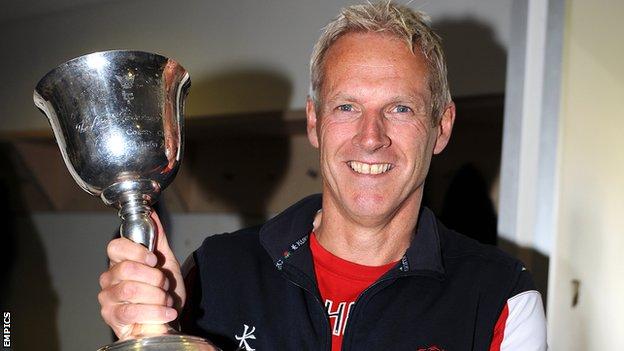 Head coach Peter Moores has agreed a new deal at Lancashire keeping him at the club until 2015.

The 50-year-old joined the Red Rose county in 2009 and led them to a first outright Championship title victory for 77 years in 2011.

The former England head coach guided Lancashire to the Division Two title this season after relegation in 2012.

"I'm really pleased because it's been a good couple of months for the club," Moores told BBC Radio Lancashire.

"A lot of lads have and we had sign as well. We're all very keen to get stuck in and build on what's been happening over the past few years."

Moores, who only agreed his last contract extension in December 2012, coached Sussex to their first Championship title in 2003.

It led to him becoming director of the National Cricket Academy in 2005, before he was named as England's head coach in 2007, a post he held for just under two years.

"Peter has done an excellent job nurturing the talent within the squad and we look forward to this continuing in the seasons ahead," added cricket director Mike Watkinson.

"Under the influence of Peter and his coaching team we have seen the emergence of several home grown players, and I am delighted that we have secured his services for a further two seasons."