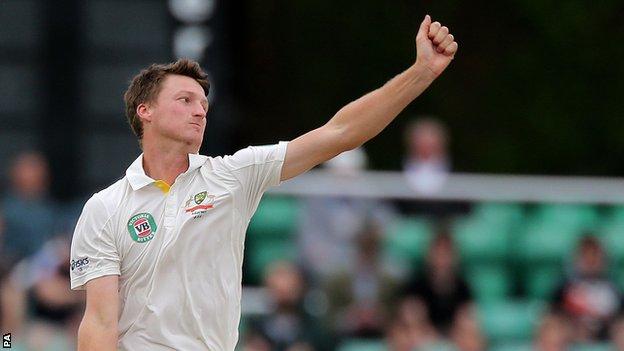 The 26-year-old has signed a deal which will see him play 10 Championship and seven Twenty20 matches for the county.

Bird, who appeared in one Ashes Test last summer, has played three Tests and taken 13 wickets at an average of 23.3.

Northants chief executive David Smith BBC Radio Northampton: "There's another Australian tour in 2015 and this gives him a chance to bowl in the UK."

He continued: "Both Cameron White and Trent Copeland spoke very highly of us and I think we ticked all the boxes.

"We've got him for a bit longer than we initially thought but he was keen to do it, and we want to take full advantage of that.

"He comes very highly recommended. Two former Northants players, Rob Bailey and Nick Cook, stood as umpires in a game he played for Australia A at Old Trafford two years ago and they were extremely impressed.

"We won't necessarily use him in the same way as Trent - he is a bit more of a striker bowler, which we think will help in Division One."

Bird, who now plays his domestic cricket for Tasmania and has taken 109 wickets at 20.7 in first-class matches, had to leave the 2013 Ashes tour early following the recurrence of a back injury.

He comes very highly recommended. Two former Northants players, Rob Bailey and Nick Cook, stood as umpires in a game he played for Australia A at Old Trafford two years ago and they were extremely impressed

Smith confirmed the signing of Bird completed the county's recruitment policy for 2014.

Smith said the club had demonstrated their desire to both retain their best players and recruit those they believed would strengthen the current squad within their cricket budget.

"The club, via its academy system, has also provided England Under-19s with two captains in the last 12 months in Ben Duckett and Olly Stone, both of whom are contracted with the club until September 2015," he said.

"Following the opening of the new purpose built grass net area, and the significant recent investment into ground facilities, the club now believes we are making real progress towards becoming a County Ground that all members, supporters and players can be really proud of."