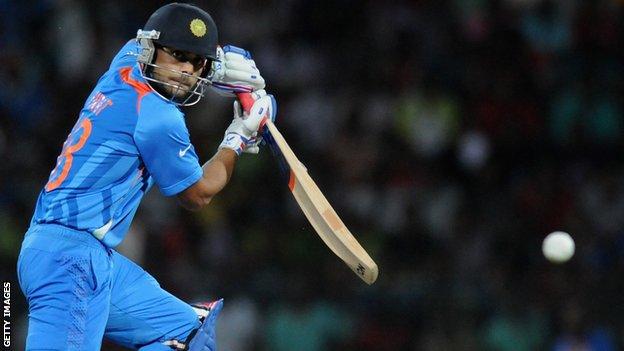 But after Dhawan made 100 from 102 balls, Kohli smashed an unbeaten 115 from only 66 to guide the hosts home with six wickets and three balls left.

Two weeks ago India made 362-1 to win in Jaipur - the second highest one-day international run chase in history.

This latest encounter in Nagpur, which saw the third-highest successful pursuit in international 50-over cricket, means Australia have been on the receiving end in each of the five largest chases in ODI history.

With the previous two matches abandoned because of rain, the best-of-seven series is now tied at 2-2. The decider will take place in Bangalore on 2 November (08:00 GMT).

After losing both openers early on, Watson and Bailey shared a 168-run partnership for the third wicket which put Australia in a seemingly commanding position.

Adam Voges (44 not out) was the perfect foil for his free-hitting captain Bailey, who eventually fell in the final over for 156 - his highest score in one-day internationals.

Chasing seven an over, openers Rohit Sharma and Dhawan gave India an ideal platform from which to launch their final charge.

Sharma was eventually dismissed for 79 midway through the 30th over, leaving the hosts 178-1.

Any hopes of an Australian fightback were dashed as Kohli, who smashed his country's fastest ODI ton from only 52 deliveries at Jaipur, immediately started to dominate the visitors' bowling.

By the time their fourth wicket fell in the 43rd over, India were left needing 61 from 43 balls.

Some powerful, yet highly controlled, hitting from Kohli and his hugely experienced skipper Mahendra Dhoni (25 not out) helped India seal victory.