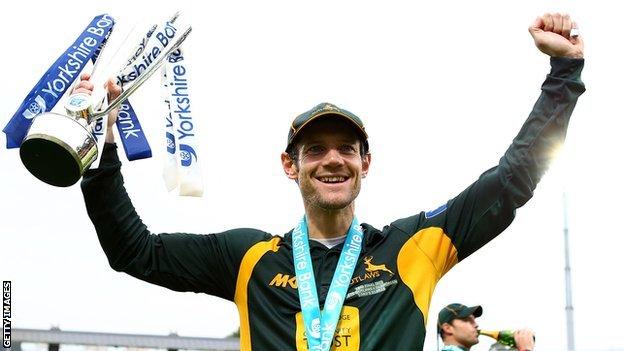 Nottinghamshire's Chris Read has signed a new two-year contract, confirming that he will captain the side in the County Championship next season.

However, he will not skipper the side in the limited-overs game, despite clinching the YB40 title last term.

The 35-year-old told the club website: "I always thought that captaincy was something that I would take on for a few years before handing over reins."

The wicketkeeper batsman made 15 Test appearances and played 36 ODIs for England between 1999 and 2007.

He has played just one Twenty20 international, facing Pakistan in 2006.

He added: "Stepping away from it in limited overs cricket is the start of me doing that."

Read, who joined the Trent Bridge club from Gloucestershire in 1998, has led the side to two County Championships and most recently to their first Lord's win since 1989.

His run-a-ball knock of 53 in the final against Glamorgan was one of few highlights with the bat last season, having scored just three half-centuries in all forms of the game.

Read finished with an unbeaten 52 in his last innings, a dead rubber on the final days of the County Championship season against Somerset.

"I demand a lot from myself and I wasn't happy with my batting in the Championship last season, although I felt that I kept wicket to a high standard," Read said.

The new limited-overs captain is yet to be confirmed, but both James Taylor and Michael Lumb have been linked to the role.