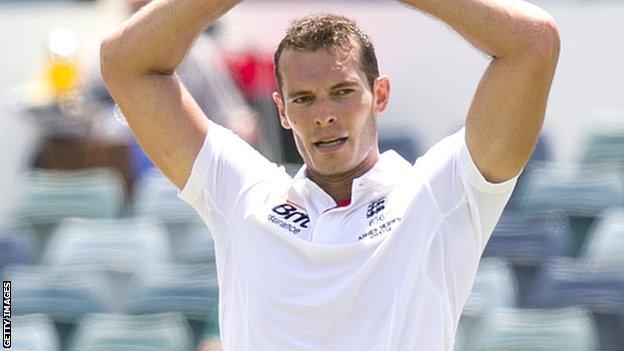 England endured a chastening first day of their Ashes tour as a Western Australia Chairman's XI made 369-4.

Chris Lynn scored 104 and three other batsmen passed 50 as England's seam attack was made to suffer at the Waca.

The much-awaited trial of the tall fast bowlers was a disappointment.

Finn, Rankin and Tremlett, all vying for the one Test place, struggled to find a consistent length and were regularly cut, pulled and driven. Stokes was equally erratic.

These are early days and the tall pacemen weren't helped by a slow pitch, but this outing will not make it any easier to determine who will play alongside Anderson, Broad and Bresnan, with Finn the slight favourite.

James Anderson took 1-31 from 16 overs but fellow pacemen Steven Finn, Boyd Rankin and Chris Tremlett took one wicket between them for 245 runs

England have three warm-up matches before the first Test in Brisbane, which starts on 21 November.

The tourists are chasing a fourth consecutive Ashes series win, something they have not achieved in more than a century.

With Anderson, Stuart Broad and Graeme Swann certain to play in the first Test, fitness permitting, only one quick bowling spot is up for grabs.

But Rankin and Finn, in particular, came in for heavy punishment against a makeshift outfit on an unusually lifeless Waca pitch.

"The pitch wasn't quite what we expected," said Surrey's Tremlett.

"It was a frustrating day as a unit, we were pretty inconsistent. We all showed some good signs at times but we were all a little bit rusty. We struggled with our lengths.

"I don't think we're concerned. It's the first day, a massive jump in work-loads for all of us.

"If you're bowling badly a few days before the [first] Test, that's when you're going to be panicking a little bit."

Lynn last played first-class cricket for his native Queensland almost 20 months ago and has since become a limited-overs specialist.

Rankin's first spell was littered with full tosses and 16 runs came off the uncapped Irishman's third over, although his second spell was an improvement.

Anderson and Tremlett had performed acceptably with the new ball, without posing major problems for two batsmen surplus to Western Australia's domestic requirements against Victoria in Melbourne.

All-rounder Ben Stokes (1-56) and part-time spinner Joe Root (1-32) were the other wicket-takers.

England captain Alastair Cook is missing the match with a sore back and Monty Panesar was ruled out with a stomach bug, while Kevin Pietersen, Stuart Broad and Graeme Swann have been rested.