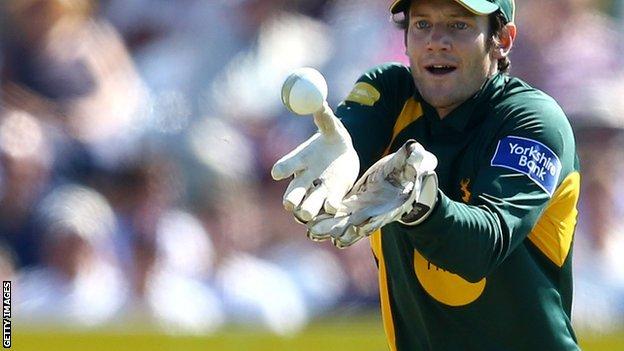 The 35-year-old, who has just signed a two-year contract extension, will remain as skipper in the red-ball game.

But he believes batsman Taylor is an ideal successor in the shorter forms.

Read so right for Notts

"Whilst Nottinghamshire supporters eagerly wait for an announcement about next season's overseas player they received the best possible news about one of their existing favourites.

"Chris Read's new contract means he will stay at Trent Bridge for at least two more years and the 35-year old has also reaffirmed that he is happy to continue captaining the side in the county championship -although he will be handing over the reins in one-day cricket.

"After a difficult summer with the bat, Read delayed talks over his future until the season had ended, but always maintained he wanted to remain at Notts.

"A first-class return of 532 runs from 23 innings, at an average of 25.33, was his poorest since 2000. But his 53, the top score in the match, proved significant as Read brought down the curtains on his one-day captaincy by leading the side to glory in the YB40 final."

"He has good pedigree and understands the game. He's still young, but is a senior player who garners respect," Read told BBC Radio Nottingham.

"It's not as if he's coming into this with no experience. He has been involved with the [England] Lions as captain for a number of years now."

Read has been Notts skipper since 2007 and led the team to the County Championship title in 2010.

He had already stepped down as Twenty20 skipper and ended his one-day captaincy at this end of last season by scoring a run-a-ball 53 to help Notts win the YB40 final against Glamorgan - their first Lord's trophy since 1989.

Read is convinced now is the right time to hand over more responsibility - and said it will be good to groom 23-year-old Taylor for the four-day role by getting him involved on the one-day side of things.

"We are looking for a bit of progression," Read continued. "I am really happy with the job I have done as captain of Notts, but I do think there is always a time to look forward.

"I feel there is probably not anyone right now who is ready made to take over the whole job. It was a question of how can we possibly get the next Notts captain - not definitely James Taylor, but possibly - involved and start building for the future with regard the captaincy side of things.

"I don't think, having spoken to James, that he was overly keen on taking on the whole job, given where he is in his own career - with a very strong case for playing international cricket in the next 12 months.

"If there was a ready-made replacement [to take over the four-day captaincy as well] it would have been something I would have considered. I would not have clung on to it with dear life if there was someone out there to take the team forward."

Read, who has been at Trent Bridge since 1998, and played 15 Tests and 36 one-day internationals for England between 1999 and 2007, said although it took a while to finalise his new deal, he was always going to stay with the club.

Joined Nottinghamshire in 1998 and was named captain in 2007

Made Test debut against New Zealand at Birmingham, in July 1999

Made ODI debut against South Africa v England at Bloemfontein on 23 Jan, 2000 and made his only T20 international appearance against Pakistan at Bristol, on 28 August, 2006.

"Leaving Nottinghamshire was never something that crossed my mind," Read said.

"I needed to work out what I wanted to do regarding the captaincy. That was an important issue we had to work out prior to me signing the deal."

And Read has not ruled out looking to extend his career when his new contract expires in 2015.

"It all depends on form and fitness. If in two years my form is good and I am fit and well, then I would like to continue.

"I have something to prove to myself after my form with the bat this year and there are still things I would like to achieve. I would love to win another Championship.

"As long as I am playing well I will keep going. I still love the game but I would like to think I will not outstay my welcome."