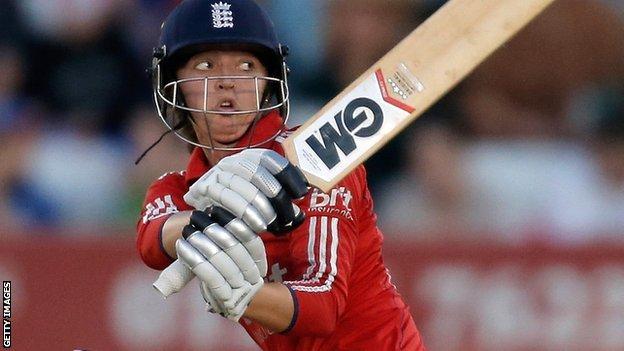 A half century from Sarah Taylor helped England to a comfortable seven-wicket win over West Indies in the second one-day international at Port of Spain.

Her 55 from 74 balls in Trinidad proved decisive as the tourists chased down 127 with more than 16 overs to spare.

(all games in Trinidad)

The final match of the best-of-three series is on Sunday at the same venue.

The first game was abandoned after only three overs because of rain.

After being asked to field first, England began brightly as Cross removed Kycia Knight, June Ogle and Stafanie Taylor to leave the Windies 14-3.

A combination of more tight bowling and some poor batting reduced the hosts to 86-8 before Shaquana Quintyne (42) at least offered some resistance.

West Indies failed to rally around her, however, and were bowled out for 126 from 38.1 overs.

After losing captain Charlotte Edwards early on, Taylor and Lauren Winfield steadied the ship by putting on 64 for the second wicket.

After Winfield fell for 31, Taylor completed her 12th ODI half century as England sealed victory.