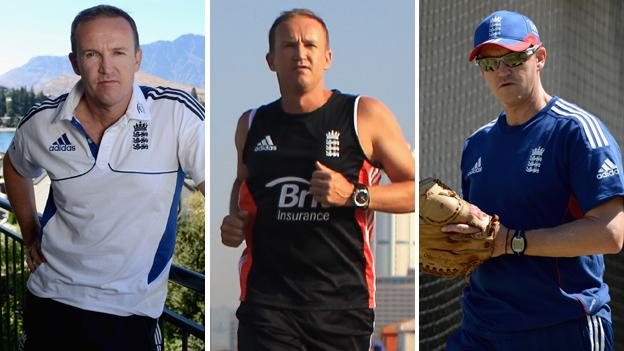 Forget iPads, smartphones and all-singing, all-dancing laptops - the secret to England's success in this winter's Ashes series in Australia could well be hidden in a humble, coffee-stained diary.

"I'm not quite as up to speed with electronics as some of the other guys are, so I still use a big A4 diary," says England team director Andy Flower in an interview with BBC Radio 5 live.

It might not be the most sophisticated piece of kit England have taken out to Australia with them, but Flower's diary is at the heart of England's intensive preparations for their three-month tour down under.

Whether it's a pre-tour meeting with Alastair Cook down by the England skipper's farm in Leighton Buzzard or a chat with the logistics people about the team's dietary needs on tour, it's all inked in.

"I met with Alastair Cook and Mark Bawden (team psychologist) and we were talking about team issues, team dynamics and some of the planning for the early part of our Ashes tour - like what types of meetings we are going to be holding," says Flower.

"Part of the preparation for this Ashes series involved a small camp [before the team left for Australia]. Some of the things we wanted were to educate the players and offer specific lessons on effective communication, leadership and how to give and receive feedback in a healthy and constructive fashion."

It becomes clear during Flower's interview, which is to be aired at 21:00 GMT on Monday, that Flower places a particular emphasis on empowering his players to grow as both players and individuals.

On the one hand, everything is mapped out for them for the next three months; Flower has even hosted a dinner solely for the players' wives so they know what is expected of them and how they can play a key role in the team's success.

"All of the detail for the wives' trip out to Australia was planned months ago," reveals Flower. "For example, we have requested the wives with younger kids arrive into Perth a few days earlier than we do, so they and the children are over the jetlag by the time we arrive, and so that the players' sleep is not too badly affected."

On the other hand, each individual is expected to strive for continual improvement and success, while also taking advantage of their "privileged positions" to grow as individuals.

"I don't want them constrained by curfews; I want them to make decisions like adults," says Flower, 45.

"We want the guys to go out and have dinner together, have a dance and just enjoy each other's company. We want them to explore the country, go to the beach, go canoeing. We want them to finish the tour of Australia enthusing about the country and saying it's been the best two or three months of their lives.

"We want to have fun too, and part of that fun is about improving ourselves. One of our principles is constant improvement.

"We have been winning quite a lot and if we do not constantly look to improve ourselves, we will slow down and the opposition will catch us up."

Flower is most definitely a man of principle. As a cricketer, and one of the best batsmen in the world, he stood up to Zimbabwe president Robert Mugabe.

And when his international career was brought to a premature end because of his protest against Mugabe in the 2003 World Cup, he quickly rose through the coaching ranks to take charge of the England team in 2009.

Since then, he briefly led England to the number one Test ranking, oversaw three consecutive Ashes triumphs and, in the shorter form of the game, delivered England their first global trophy at the World Twenty20 in May 2010.

So when he talks about his players developing on and off the pitch, does he practise what he preaches?

"I have used an executive coach for a couple of years now and he's been a great sounding board for me," says Flower. "He also challenges me about my own personal growth.

"He's a good guy to discuss some of the issues and some of the problems I might have with the team or with relationships."

Flower readily admits it is those personal relationships which can be the hardest to deal with as he strikes a balance between coach and manager.

In the past 18 months alone, the former Essex batsman has had to deal with the fall-out of Kevin Pietersen's indiscretions and, in the build-up to this summer's Ashes series, the news that Joe Root had been punched in a late-night incident with Australia's David Warner.

While Flower does not attach much blame to Root, it highlights that even the best-laid plans can be shaken by off-field problems.

"One of the things I always find the most challenging is managing relationships and keeping people heading in the right direction," says Flower.

"In a healthy culture, I'd expect a lot of the gripes which naturally occur to be dealt with before they even get to me.

"But we're dealing with young, red-blooded athletes and there is always going to be the odd problem. Generally, we have a culture where we respect each other, respect other people and we are hungry for success."

However, the close proximity of this winter's tour to the previous Ashes series in England this summer means there is still some simmering tensions between the teams.

It has since been played down, but Flower's opposite number Darren Lehmann stoked emotions when he told the Australian public to "give it to [Stuart Broad] right from the word go for the whole [Australian] summer" after the England bowler did not walk after edging Ashton Agar to slip via keeper Brad Haddin's gloves in the first Test in July.

"The scrutiny in Australia is perhaps sharper but Australia is a great place to tour," Flower said. "It's a sensational place: the people are great, they enjoy a little bit of ribbing and they enjoy challenging you.

"But I don't think there's anything to be scared of at all; there's nothing to be apprehensive about."

Such confidence is built on Flower's knowledge that England could not be better prepared by the time the first ball is bowled in Brisbane on 21 November.

While he might not make statements like Lehmann, Flower is the undisputable driving force of an England team that have been one of the dominant forces in world cricket in recent years.

"I look at it this way: our head coach isn't on Twitter; their head coach is," said England batsman Jonathan Trott when asked about Lehmann in a BBC Sport interview.

No, he's not. And before that happens Flower would have to ditch his old-fashioned diary, which seems unlikely this winter.