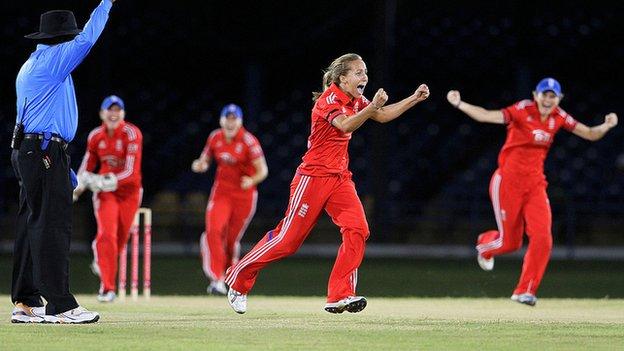 A century from Sarah Taylor helped England's women secure a one-day series victory over West Indies at Port of Spain.

The wicketkeeper followed up her 55 in the second game with 100 as England won by 89 runs, taking the series 2-0.

England's focus now turns to retaining the Ashes in Australia in January.

All games played in Trinidad

A seven-wicket victory two days earlier had given England the advantage after the first match between the sides was abandoned because of rain.

In the final fixture of the series, England captain Charlotte Edwards lost the toss and, with her side asked to bat first, got off to a poor start as she was bowled by Tremayne Smartt for six.

Taylor fell to the final delivery of the innings, but slow left-armer Colvin more than matched Mohammed to lead England's response with the ball.

Fittingly, player of the series wicketkeeper Taylor was involved in the final act as Subrina Munroe was caught behind off Colvin to seal victory.