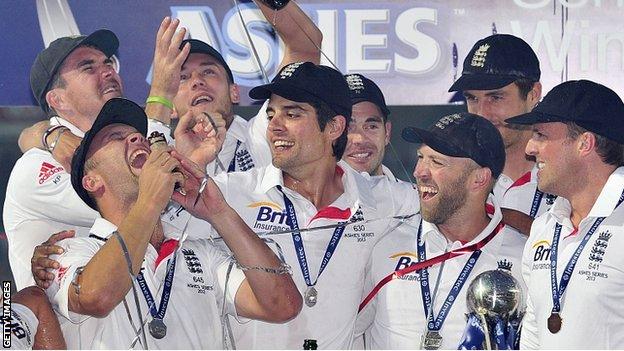 Shane Warne has started the traditional pre-Ashes war of words by claiming that England will lose the series down under unless Alastair Cook captains the team in a more imaginative manner.

While I have the utmost respect for one of Australia's finest cricketers, I prefer to judge people on outcomes rather than methods and England's results since Cook took command suggest he is doing a very good job.

Cook has won four of his five series in charge, including a historic triumph away in India and a 3-0 win in last summer's Ashes series. In 16 Tests, he has lost just once.

The England opener is fortunate enough to have a very strong group of players at his disposal, allowing him to continue with a method that is tried and trusted.

It may not always produce the most thrilling cricket, but who cares about that if it results in a victory?

And although it is possibly true that those three are generally more inventive than Cook in their field placings and bowling changes, I would argue they have to be because of the lesser calibre of player at their disposal.

If you are always chasing the game and searching for something to happen, as Clarke usually was during the summer Ashes series, you have to gamble and think outside of the box.

Cook, on the other hand, knows more often than not, if his side remains patient then one or more of his many proven match-winners will put their hand up and turn the match in England's favour. This was the case in the Durham Test when Stuart Broad turned the game with that devastating spell of bowling.

I fully expect that approach to pay dividends again down under because England remain a considerably stronger unit than their Aussie counterparts, but that is not to say there won't be periods when the hosts are on top.

If and when that happens, I have no doubt that Cook will have what it takes to try something different. He is a quick learner who has an excellent cricket brain. From the moment he walked into the England team and scored a hundred on debut against India in Nagpur at the age of 21 he has impressed me with everything he has done.

Like all captains, he will constantly be asking himself: 'How can we win this match?' 'What gives my team the best opportunity of winning this day, this session, this hour, this over, this ball?' And if that means diverting from his current methods, then I'm sure he will not hesitate to do it.

Cook's duties in Australia will not just be confined to the field of play. On a long tour, the captain has a vital man-management role, making sure each individual is fully aware of what their responsibilities are and that they are in the best frame of mind possible for the matches.

One of the hardest tasks is telling a player they are being left out. Not only do you have to convey the bad news, but you have to keep an eye on that player for the next couple of days, to keep their spirits up and make sure they still feel part of the group.

I remember having to inform Angus Fraser he was being dropped for the Perth Test in the 1998-99 Ashes. It was tough telling a mate and an experienced player that he wasn't playing but it was something I had to do, and I hope he respected me for being honest with him about the reasons for the decision.

Judging by the glowing terms in which Cook is spoken in by his team-mates and the England coaching staff, he is doing as good a job off the field as he is on it.

Warne's latest barb may well have been designed to try to provoke a reaction from Cook, to get him to change the way England play their cricket to the benefit of Australia.

But while the leg-spinner was too often England's tormenter on the field of play, there is very little damage he can do from the confines of the commentary box and his newspaper columns.

And if Cook continues to captain in the way that has already brought so much success, while always staying ahead of the game, then I fully expect him to be lifting the Ashes urn again in January, if not before.