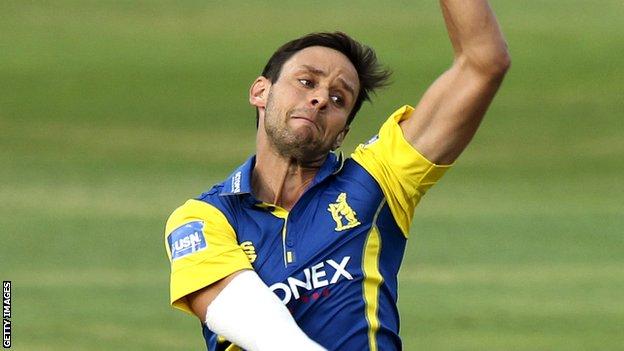 Sussex have signed all-rounder Steffan Piolet on a one-year contract after he was released from the final year of his deal at Warwickshire.

The Redhill-born 25-year-old, who moved to Edgbaston in 2008, had a brief loan spell at Hove last season.

Sussex cricket manager Mark Robinson said: "We're really excited at the prospect of having Steff on board.

"Being a local lad, having played youth and second team cricket with us, he is somebody we know really well."

He added: "We appreciate and admire Warwickshire's willingness to do what is best for the player by releasing him and allowing us to pick up the last year of his contract."

Piolet began his career in Sussex playing in the Sussex Premier League and made a handful of appearances for Sussex's second XI, but then moved to Warwickshire.

The right-arm seamer has mainly been used as a one-day player during his stint at Edgbaston, making just four first-class appearances during his time with the Bears.

He was an ever-present in their FLt20 campaign in 2013 and missed just one match in the YB40. In total, he made 51 T20 and 34 List A appearances for Warwickshire.

Having featured twice for Sussex's second XI during his loan spell in August, Piolet hopes he can feature in all three formats next season.

"I'm delighted to be back home with Sussex," Piolet said.

"I always wanted to play here at some point in my career and I'm looking forward to fighting for a place in all forms of the game."

Robinson added: "The make-up of our squad means he has every chance of getting some opportunities to prove he is more than just a very good one-day player."