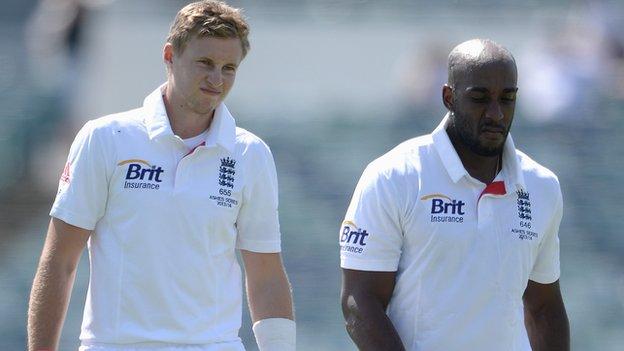 England have named Michael Carberry, Gary Ballance and Chris Tremlett in their side to face Australia A in their penultimate Ashes warm-up in Hobart.

With one batting position still up for grabs, Carberry opens with captain Alastair Cook, with Joe Root at five, Ballance at six and Ian Bell rested.

"Obviously don't read too much into the team, but Root moving down is a significant move. Illustrates they have no idea who will bat at 6."

Meanwhile, Tremlett lines up as third seamer in what could be a possible Test attack with James Anderson, Stuart Broad and spinner Graeme Swann.

Cook won the toss and elected to bat.

The England skipper had missed the opening warm-up game in Perth because of a back injury, but returns alongside Kevin Pietersen, Broad and Swann who were also rested for that game.

It means England are fielding at least eight players who, along with Bell, are certain - barring injury - to play in the first Test in Brisbane on 21 November.

Omitted from the team from Perth are all-rounder Ben Stokes and pacemen Steven Finn and Boyd Rankin, while wicketkeeper/batsman Jonny Bairstow and spinner Monty Panesar are the two men yet to feature on the tour.

Australia A, captained by Moises Henriques, field a number of players on the fringes of Test selection in a batting-heavy XI.