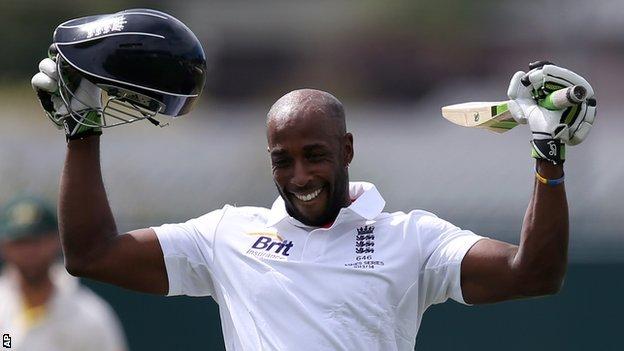 Openers Alastair Cook and Michael Carberry shone with unbeaten centuries as England made 318 without loss on the first day of their four-day Ashes warm-up game against Australia A in Hobart.

After Cook won the toss, the two left-handers batted through the entire day.

Carberry put himself firmly in Test contention with 153 not out, hitting 22 fours and lofting spinner Jon Holland for two straight sixes.

Meanwhile, Cook played himself into form with a serene 154.

"A remarkable day for Michael Carberry - talk about seizing your opportunity. It might have a big knock-on effect for England as he may have scuppered Joe Root opening for now, he's absolutely scuppered it for Jonny Bairstow, and probably for Gary Ballance as well, as Root will bat at six. It would be interesting - if they ever tell us - to ask England, if it wasn't for Cook's bad back, whether Cook would have opened with Carberry or Root in the first game in Perth."

The pair's unbroken opening stand was the highest first-wicket partnership for England since Cyril Washbrook and Len Hutton put on 359 against South Africa in 1948.

Graham Thorpe and Mark Ramprakash were the last England partnership to bat through a full day, against South Australia in November 1998.

It was a dream Test audition for 33-year-old Carberry, who, since winning his only Test cap in March 2010, has battled serious illness and set up his own business after qualifying as an electrician in the expectation England might never come calling again.

With an Ashes place up for grabs, and the first Test in Brisbane a fortnight away, he offered one chance - when he had already scored 135 - but did not look out of place alongside Cook, with whom he opened in that sole Test appearance against Bangladesh in Chittagong when they added 72 and 65.

After making 78 in the previous warm-up game at Perth, Carberry's inclusion meant Joe Root moved down to number five, with Ian Bell rested - pointing towards a possible choice for the Test XI between Carberry and Yorkshire's Gary Ballance, who was handed another chance in the problem position of number six, despite a first-ball failure in Perth.

Jonny Bairstow now looks out of contention for the number six role after failing to feature in either warm-up game, while Chris Tremlett's inclusion in a four-man attack, alongside Test certainties James Anderson, Stuart Broad and Graeme Swann, indicated he may be favourite for the third seamer's role ahead of Steven Finn and Boyd Rankin.

Carberry was outscored by his captain early on as the two left-handers saw off the new ball, but came out of his shell after the opening stand had passed 50, hoisting uncapped slow left-armer Holland over mid-off for a couple of fours.

Australia A skipper Moses Henriques found little assistance for his five-man attack while Holland, nominally the front-line spinner, was outbowled by part-timer Glenn Maxwell, who extracted more turn and bowled with greater economy.

Cook, characteristically strong off his legs, brought up his fifty before lunch with successive fours off Maxwell's off-spin, and had made 80 by the time Carberry had only 44 to his name.

The Cook and Carberry show

But while Carberry took until halfway through the day to reach his half century, he did so in style with a flashing drive for four, moved up through the gears with some powerful pull shots and used his feet well against the spinners.

Carberry survived a loud lbw appeal from Ben Cutting on 83, with replays showed the ball pitching a fraction outside leg stump, but Holland's return to the attack gave him the chance to draw level with Cook on 94 just before tea with an attractive cover-driven four and a lofted six.

While Cook marked his century in the first over after the interval with an undemonstrative wave of his bat, his partner could be forgiven for a more emotional reaction to reaching the same landmark, three years after a blood clot on his lung threatened more than just his cricket career.

And when his former Hampshire team-mate Maxwell served up an inviting half-volley on leg stump, Carberry helped it through long leg for four to complete his first hundred in England colours, removing his helmet to acknowledge his team-mates who rose to salute the centurion.

By the 77th over, such was the fielding side's desperation they turned to the off-spin of Usman Khawaja, who boasts one first-class wicket in nearly six years.

The Aussies had waited all day for a chance - and it finally came at 288-0 just after the second new ball was taken when Cutting found the edge as Carberry attempted another flashing drive, but Trent Copeland grassed a straightforward chance at gully, as if to sum up Australia's day.