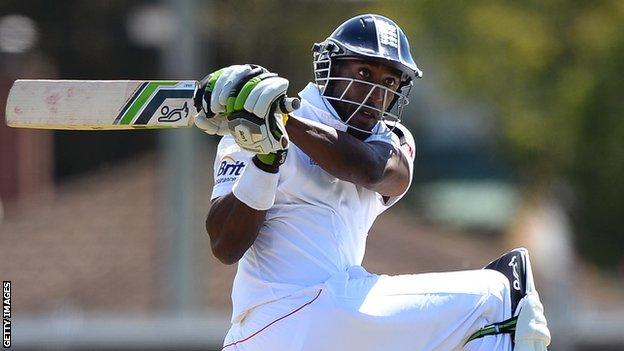 England's Michael Carberry boosted his hopes of playing in the Ashes with 153 not out - then reflected on how close he came to dying just three years ago.

The Hampshire star batted through the entire first day against Australia A in Hobart as he and captain Alastair Cook made a commanding 318 without loss.

It's been a tough couple of years, but thankfully strength of mind is a big thing

But, in 2010, a blood clot on his lung threatened more than just his career.

"It does give your cricket perspective when you're close to losing your life," Carberry, 33, told BBC Sport.

"It's been a tough couple of years, but thankfully strength of mind is a big thing. I've a very supportive family back home and they helped me through it.

"I'm glad to be back. Cricket's a different battle, let's put it that way."

After being named in the Ashes touring party ahead of Nick Compton, and scoring 78 and 153 not out in his two innings on tour, he is remaining grounded about his prospects of playing in Brisbane in a fortnight.

"I didn't come here with any major expectations. I just try to take it from game to game," he said.

"If I bat well when I get the chance, I give myself every possible chance to play, but I'm not trying to look too far ahead.

"The Gabba's still a couple of weeks away, so there's no point in worrying whether I'll be selected or where I'll be batting."

Carberry and Cook, who hit 154, opened the batting in the penultimate warm-up game before the first Test, which begins on 21 November.

"It was quite tough early on but I think it was a good day's batting. We had to dig in and survive, but as the wicket dried out the ball came on a little bit better and we tried to capitalise," Carberry said.

"We had talked at great length about setting big first-innings scores - it sets it up for the guys coming in later to push the accelerator pedal.

"Alastair Cook's our leader and it's great to see him leading from the front."

Carberry played one Test, opening with fellow left-hander Cook, in March 2010 in Bangladesh before he was left out of the next game as England opted to play a second spinner in a five-man attack.

He went on to hit 1,385 first-class runs that summer - the best haul of his career.

Later that year, he was selected for the England performance programme squad to travel to Australia and shadow the main tour party. But he had to pull out after being treated for blood clots and shortness of breath, which prevented him from going on long-haul flights.

He missed half of the 2011 county season, only returning in July, but a month later scored 300 not out in a partnership of 523 with Neil McKenzie against Yorkshire - a Hampshire record for any wicket and, at the time, the ninth-highest for any wicket in all first-class cricket.

But would he have played in England's first tour game in Perth had Cook not been ruled out with a back injury?

"We'll never know now," said Carberry. "I was just told I was opening in Perth, then opening today, so I was looking for more of the same."