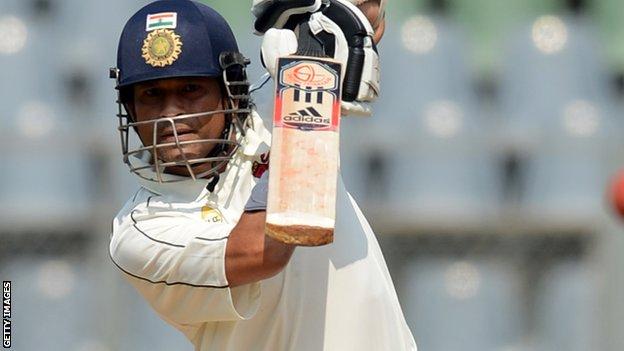 Sachin Tendulkar scored just 10 runs in the first innings of his penultimate Test as India took control on day two against West Indies in Kolkata.

Tendulkar, 40, was given a rousing reception at Eden Gardens after coming out to bat with India on 57 for two.

He lasted only 24 balls before falling lbw to a Shane Shillingford delivery that hit him high on the back pad.

Rohit Sharma led the recovery from 83-5 with a century on his Test bow as India took a first-innings lead on 354-6.

Tendulkar walked to the crease in the eighth over of the day to rapturous applause but fell in contentious circumstances.

Facing off-spinner Shillingford, Tendulkar was beaten by his doosra - the ball pitching on middle stump and straightening - which hit him high on the back leg.

Television replays suggested the ball would have bounced over the stumps, but India have been resistant to using the Decision Review System, which allows players to refer disputed decisions to the third umpire, so it is not being used in this two-Test series.

Tendulkar, Test cricket's record run-scorer, will bring his illustrious career to a close after the second Test in his home town of Mumbai, which starts on 14 November.

After Tendulkar's controversial wicket, Shillingford quickly dismissed Virat Kohli to a catch at bat-pad to leave India struggling on 83-5.

But Sharma, making his Test debut after playing 108 one-day internationals and 36 international Twenty20 matches for India, turned the match around with an 83-run sixth wicket stand alongside captain Mahendra Singh Dhoni.

Once Dhoni edged Tino Best behind for 42, Sharma teamed up with Ravichandran Ashwin in an unbroken 198-run partnership that guided India into a useful 120-run first innings lead.