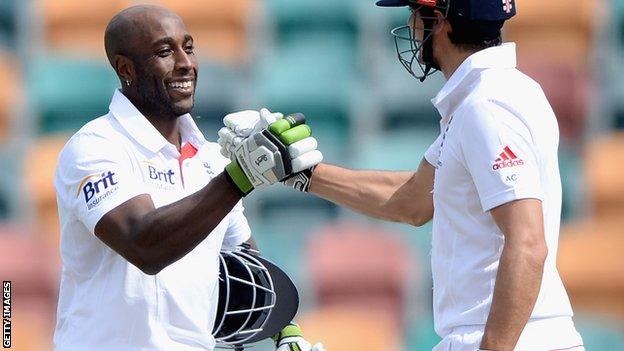 Michael Carberry is in line to complete a remarkable turnaround in his career if he is chosen for England in the opening Ashes Test.

Having made his only Test appearance in Bangladesh three years ago, the Hampshire batsman was almost forced to quit cricket after becoming seriously ill with a blood clot on his lung in 2010.

But after qualifying as an electrician - which has occupied his last two winters - he has now established himself as favourite to open at the Gabba in Brisbane after scoring an unbeaten 153 and 78 in his first two innings on the tour.

"It's been a tough couple of years," Carberry told BBC Sport. "In a strange way, it does give your cricket perspective when you're close to losing your life."

It took Carberry several years to start showing the potential that would eventually lead to his place back in England's squad for the Ashes tour.

He struggled to establish himself after making his first-class debut for Surrey in 2001 and joined Kent, hopeful of greater opportunity, two years later.

That move did not go as he would have liked, though, and he even considered quitting cricket altogether when he again failed to become a regular member of their side.

It was his switch to Hampshire in 2006, initially on a two-year contract, that revitalised his career and he revelled in the support shown in him by Shane Warne, his new captain, to earn selection for the England A tour to Bangladesh that winter.

He was also chosen for the England Lions tour to India a year later after scoring more than 1,000 first class runs in 2007 and helped Hampshire win the Friends Provident Trophy in 2009 and 2010.

After scoring 1,385 first-class runs in the summer that followed his Test debut in March 2010, he appeared set for a bright England future - and was selected for the England Performance Programme squad trip to Australia that winter.

However, he had to withdraw after being diagnosed with the blood clot and suffering shortness of breath, which ruled him out of taking any long flights. He faced an uncertain future wondering whether he would even be able to continue playing county cricket for Hampshire.

Extensive treatment forced him to miss the first half of the 2011 season while he recovered and, although he returned impressively by scoring an unbeaten 300 against Yorkshire, it was thought his England Test chance had gone.

Carberry, now 33, continued to make regular runs at domestic level and established himself as one of the best fielders in the county game, developing into an explosive one-day batsman, and helping Hampshire win the double of the Friends Life Twenty20 tournament and the CB40 in 2012.

He was rewarded for his consistent form by being given his one-day international debut against Australia at the end of last summer and then became a surprise choice for the Ashes tour ahead of Somerset's Nick Compton.

Even after selection, he was regarded as a reserve opener in case of injury or illness, but took his opportunity by scoring a half century in the opening match against a Western Australia X1 in Perth, when England captain Alastair Cook sat out the match with a slight back strain.

It earned him the chance to open alongside Cook, ahead of Yorkshire's Joe Root, in the match against Australia A in Hobart - where his unbroken 318-run stand with the captain looks to have propelled him towards selection for the first Ashes Test.