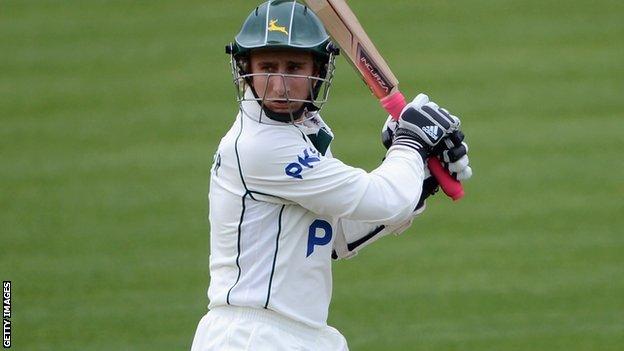 Taylor, who has agreed a two-year deal and is taking over as one-day captain, has also been named as Chris Read's vice-captain in the Championship.

Director of cricket Mick Newell says the new leadership structure will benefit both the club and the players.

I'll enjoy the extra responsibility. I'm going to relish every minute of it but most importantly I need to lead from the front with the bat.

"It's important to have a succession plan and I was keen to get James involved in the captaincy," he said.

"Chris had stepped aside to allow David Hussey and Adam Voges to captain our Twenty20 side in recent seasons and benefited from having that break. This is a natural extension of that with James very suited to the role.

"Both players are pleased with the arrangement and I'm hopeful that it will help us to continue to improve.

"It's almost impossible to combine an international career with club captaincy and we will re-evaluate things if James becomes a Test regular."

Taylor, who has committed to the club until the summer of 2016, captained Nottinghamshire to victory over Surrey in four-day game last season and has also skippered England Lions.

He said: "I've had positive experiences leading the Lions against good opposition on tough tours.

"There are challenges that come with it but I'll enjoy the extra responsibility. I'm going to relish every minute of it but most importantly I need to lead from the front with the bat."

Taylor won two Tests caps against South Africa in 2012, but was overlooked for a place in England's squad for this winter's Ashes tour, with the selectors preferring to give Yorkshire's Gary Ballance a chance to stake a claim for a middle-order place.