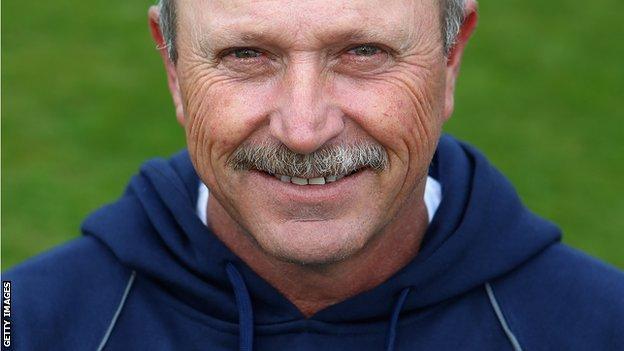 Somerset have revamped their first-team coaching set-up with the addition of David Houghton and Jason Kerr.

Houghton takes on the role of assistant and batting coach after recently leaving Derbyshire, while Kerr, who had been working with the second XI at Taunton, will focus on the bowlers.

Somerset finished sixth in the Championship this summer, winning only three of their 16 games.

Earlier this month, however, director of cricket Dave Nosworthy admitted it had been a "tough" season and will be looking to Houghton and Kerr to help make them more of a force in four-day cricket next summer.

Houghton, 56, played 22 Tests for Zimbabwe and has also worked as director of national coaching in his homeland.

"Dave is a magnificent coach in his own right. He has real credibility," Nosworthy told BBC Somerset.

"He'll look after the batting and make sure it's as polished as possible."

Nosworthy added of 39-year-old Kerr: "Being an ex-bowler himself it's a passion of his and it's an area we thought was pretty important to polish up.

"We want to make sure we look after the specialist areas to make sure the players are getting the best out of their own game."