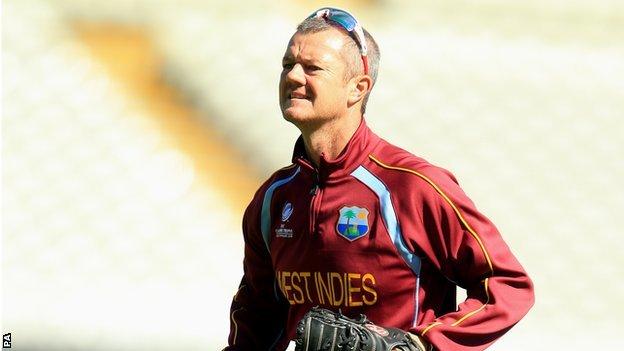 Wicketkeeper Wallace was skipper in the County Championship in 2013, while Marcus North led the one-day team.

North has left the county, and Radford hinted Wallace could retain his role.

"I'd imagine so, but it's early days for me and those discussions have still got to be had with Hugh [Morris, Glamorgan CEO], so there's still some decisions to be made," said Radford.

"We are in that stage at the moment of chatting it through and I am sure we will make a decision fairly soon."

If confirmed, it will be Wallace's third season as captain of the Welsh county.

Caerphilly-born Radford, 41, started his job at the Swalec Stadium this week having been appointed by Morris who takes over as chief executive and director of cricket in January.

As well as hinting that Wallace would retain the captaincy, Radford confirmed that coaches Robert Croft and Steve Watkins will stay with the county but that their roles have yet to be agreed.

Former England players Croft and Watkin - both bowling coaches at Glamorgan - applied for the head coach role, but were beaten to the post by Radford.

"It will be the same coaching unit, we will all work together," said Radford.

"It's important we are all close and singing of the same hymn sheet, and the players know what the message is.

"So the message has to be the same whatever coach they speak to.

"I think once Hugh is fully here as director of cricket, we will make those final decisions on who is doing exactly what role.

"But we will all be involved and working with all the squad."

Radford also revealed the Glamorgan job as the one county job he really wanted and described it as his "home county".

"It's not just a county, I see it as a country, because it's the whole of Wales," he said.