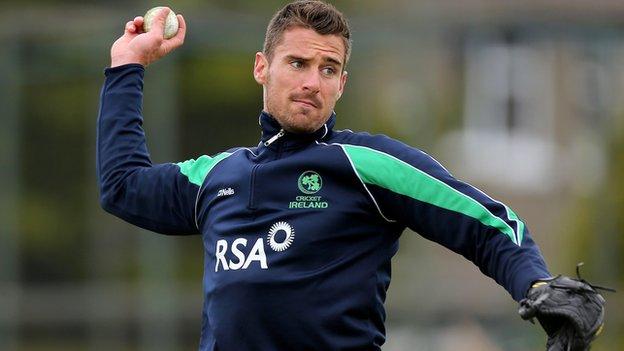 Max Sorensen starred as Ireland warmed up for next week's World Twenty20 qualifying tournament with a nine-run win over a local Wings XI in Dubai.

Sorensen struck an unbeaten 28 off just 18 balls to help Ireland post 121 for 9 in their 20 overs after they had been precariously placed on 84 for 7.

Tim Murtagh took two early wickets but the local side were 81-4, before Stuart Thompson and Sorensen took two wickets apiece to put Ireland in control again.

Sorensen struck two sixes and two fours in his innings after coming to the crease when Ireland were in some trouble at 84-7.

Skipper William Porterfield (22) and James Shannon (18) both got starts, but a ring rusty Ireland lost wickets at regular intervals.

Their cause wasn't helped by the early dismissals of Kevin O'Brien and Trent Johnston, both of whom failed to score.

Thompson (2-15) removed both batsmen in quick succession, and a further two wickets from Sorensen (2-13) swung the match back in Ireland's favour.

With ten needed from 12 balls, left-arm spinner Dockrell (2-10) had Connell stumped by Gary Wilson to complete the narrow nine-run win.

Ireland are attempting to make the World Twenty20 finals for a fourth successive time, and have been seeded number one in Group A of the 16-team event - six qualifiers will go forward to Bangladesh next April.

The Irish will face a UAE League Select XI, the Netherlands and Papua New Guinea, before starting their qualifying campaign with a fixture against Namibia on 15 November.