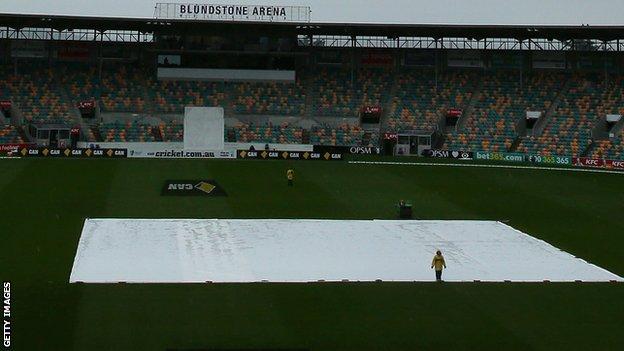 Wet weather prevented any play on day two of England's second Ashes warm-up game with Australia A in Hobart.

Heavy rain delayed the scheduled 23:00 GMT start before play was finally abandoned at 05:20 GMT because the bowler's run-up area at the southern end was judged too wet.

The final two days of play will start half an hour earlier at 22:30 GMT.

England are 318-0, with captain Alastair Cook on 154 and fellow left-hander Michael Carberry on 153.

The openers batted through day one after Cook won the toss.

England, who drew their opening tour match against a Western Australia Chairman's XI in Perth, complete their preparations for the first Test with a four-game against a New South Wales XI in Sydney.

Meanwhile Australian batsmen David Warner and Michael Clarke were able to gain some valuable match practice in the sunshine at Melbourne for New South Wales against Victoria in the Sheffield Shield.

Left-handed opener Warner struck 16 fours in 104 from 87 balls, sharing 104 with skipper Clarke, fit again after recent back trouble, who struck 43 off 79 balls with six boundaries.

The first Ashes Test starts in Brisbane on 21 November.