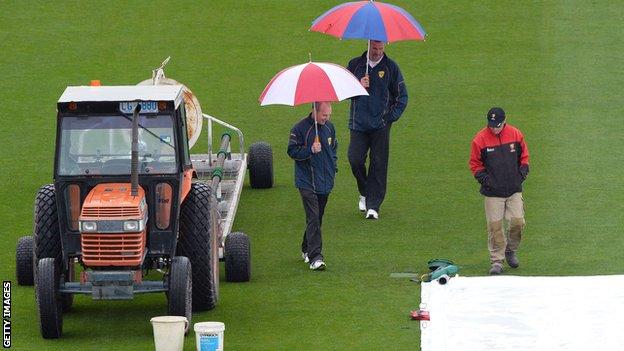 Rain prevented any play on day three of England's rain-hit Ashes warm-up game against Australia A in Hobart.

After day two was washed out, persistent rain returned to thwart any hopes of a resumption.

Play was abandoned without a ball being bowled at 04:45 GMT.

The fourth and final day's play will start at 22:30 GMT, with England 318-0 in their first innings after captain Alastair Cook and Michael Carberry hit unbeaten centuries on day one.

Although play will begin half an hour before the scheduled start, hopes of a meaningful contest appear over after two blank days.

If play is possible, England must decide whether to use the time to give more of their batsmen - such as Kevin Pietersen, who was rested for the first warm-up game - time in the middle, or give their bowlers a run-out.

"It is frustrating," England batting coach Graham Gooch told BBC Radio 5 live. "Some of the guys haven't played so they want to get in the middle. If you are just sitting around, it's difficult.

"They do need to be out there because time's short now. There are only five playing days left before the first Test, and that's minimal."

England drew with a Western Australia Chairman's XI in Perth in their first tour match.

They complete their preparations for the first Test with a four-day game against a New South Wales XI - augmented by guest players from other states - in Sydney, starting on 13 November.

The first Test against Australia at the Gabba starts on 21 November.