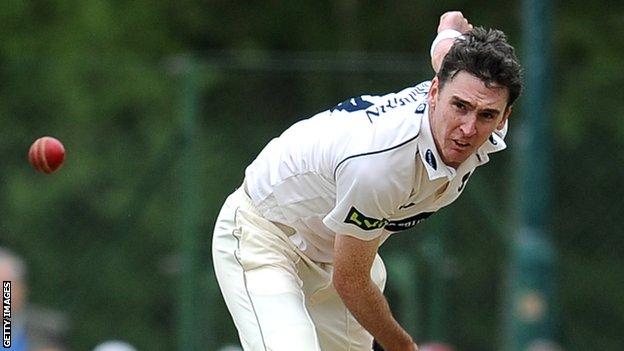 The 33-year-old Australian joined in 2012 and has finished as the side's leading County Championship wicket-taker in both of his seasons at Hove.

"I am delighted that Sussex have asked me to continue at the club for the 2014 season," Magoffin said.

"The last two years have been very enjoyable and I hope to continue to perform well for Sussex."

Magoffin took match figures of 9-55 on his debut for Sussex against Lancashire and went on to finish the 2012 campaign with 57 first-class wickets at an average of 20.05.

He surpassed that total last season, taking 63 wickets at 21.49. His stand-out performance came when he finished with match figures of 12-31 against Somerset in May, helping Sussex to victory within two days at Horsham.

Sussex captain Ed Joyce said it was "great news" that the club had extended Magoffin's deal.

"Mags has led our attack brilliantly in four-day cricket in the last couple of years and has been one of the best performers in county cricket over that period as well," Joyce said.

"He is certainly a man in demand, so to get his signature for another season is a relief."

The 32-year-old came through the youth ranks at the club and made his first-team debut in 1999.

"Mike Yardy embodies all that is best in Sussex cricket; a home-grown player who worked his way up to captain his county with distinction and play for his country," Sussex chairman Jim May said.

"Mike has been a key player in Sussex's best ever period of success, winning the County Championship and all of the one-day trophies."