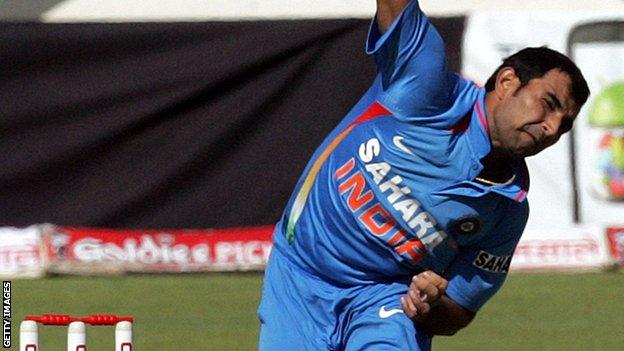 A five-wicket haul from debutant Mohammed Shami helped India to wrap up a comprehensive victory over West Indies by an innings and 51 runs in Sachin Tendulkar's penultimate Test.

Ravichandran Ashwin chipped in with three wickets as the tourists collapsed from 101-1 to 168 all out in Kolkata.

Ashwin had earlier completed his second Test ton as India added 82 more runs to their overnight score to finish on 453.

But the Windies, bowled out for 234 in the first innings, struggled again.

Chris Gayle scored the first 33 runs before he was dismissed, while fellow opener Kieran Powell (36), who took 31 deliveries to get off the mark, was second out with the score on 101.

Darren Bravo and Shivnarine Chanderpaul also made solid starts but neither progressed beyond 40.

The tail fell apart with Shami bowling captain Darren Sammy and Shane Shillingford in the same over as India completed victory inside three days at Eden Gardens.

Shami's display of controlled reverse swing saw him finish with 5-47, to add to his 4-71 from the first innings to become the first Indian fast bowler to take nine wickets in his first Test match.