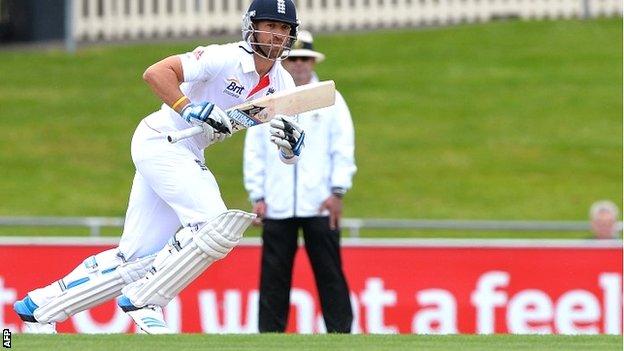 England wicketkeeper Matt Prior will have a scan after suffering a calf injury in the warm-up match against Australia A in Hobart.

The 31-year-old Sussex gloveman is thought to have sustained the problem while making 26 in England's 430-7 on the final day of the rain-hit fixture.

Prior did not take the field as the home side reached 119-3 at the close, Joe Root deputising behind the stumps.

The first Ashes Test takes place in Brisbane on 21 November.

England team director Andy Flower is confident his wicketkeeper will recover in time for that opening match and he said the injury would be scanned in due course.

"He's tweaked something in his calf," said Flower. "We hope it's not too bad. It's a little early to have a scan just yet so we'll let that settle."

Asked whether he was concerned by the injury so close to the start of such an important series he added: "Of course, but there are 12 days to go and I would anticipate he'd be OK."

Prior, who has played 72 Tests, is a key component of the England team and has not missed a match since Barbados 2009, a span of 57 consecutive Tests.

He faces a race to be fit for the final warm-up game, a four-day contest against an Australia Invitation XI in Sydney starting on Wednesday.

Yorkshire's Jonny Bairstow, who has scored 544 runs at an average of 30.22 in his 12 Tests played solely as a batsman, is the reserve wicketkeeper on the tour.

BBC cricket correspondent Jonathan Agnew was watching the match and said: "Clearly to lose your wicketkeeper for the first Test would be a disaster but we're still a long way from that.

"They will be very keen that he lines up in the team in Sydney on Wednesday so he can get some much needed batting practice, they'll be working furiously between now and then, and I'm sure he'll play."