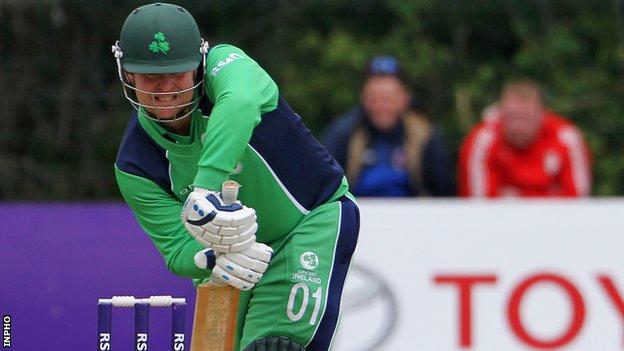 Paul Stirling's half century helped Ireland earn a 14-run win over a strong Wings XI in their latest warm-up game ahead of the World Twenty20 qualifiers.

Stirling handed out for rough treatment to former Ireland bowler Peter Connell as he struck three sixes and four fours in his innings.

The 23-year smashed 19 from Connell's third over during an opening stand of 49 with skipper William Porterfield (17).

Niall O'Brien was run out for just a single, while Kevin O'Brien and Gary Wilson chipped in with 13 and 21 respectively.

In reply, Wings, looking gain their second win over an Associate in 24 hours having beaten Afghanistan by eight wickets on Friday, wobbled to 7-3 before Coventry steadied the ship along with Barbados all-rounder Alciendro Holder.

The pair added 55 in 11 overs before Stirling dismissed Coventry for 36 and from then on Ireland were always firmly in control.

Holder top scored with 41 from 38 balls before becoming the third of Sorensen's (3-9) victims.

Kevin O'Brien bowled superbly at the death, claiming 3 for 19 as Wings were dismissed for 106.

Niall O'Brien was back behind the stumps for Ireland, taking two catches in an impressive display, while Alex Cusack (1-12) returned from injury to take the final wicket and clinch the 14 run win.

Ireland continue their ICC World Twenty20 preparations with warm-up games against The Netherlands on Tuesday and Papua New Guinea the following day.

Their opening game in the tournament is against Namibia in Abu Dhabi next Friday.