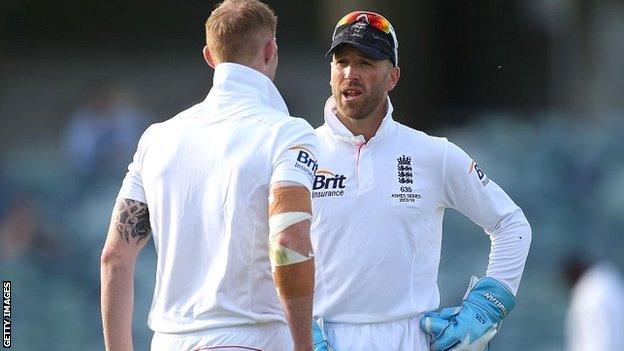 England wicketkeeper Matt Prior is a doubt for the first Ashes Test in Brisbane after scans revealed a low-grade tear in his calf.

Prior, 31, will be replaced by Jonny Bairstow against a New South Wales XI this week as he continues his recovery ahead of the first Test on 21 November.

He was injured in the warm-up match against Australia A on Saturday.

"Very disappointed to be missing game but doing everything possible to be ready for the 1st Test," Prior tweeted.

The news is the latest worry for England after batsman Kevin Pietersen had a cortisone injection in his knee following the game in Hobart.

But the 33-year-old is available for the tour match at the Sydney Cricket Ground this week.

England batsman Ian Bell accepted Prior's absence was a concern with the Ashes series just over a week away but was hopeful he would recover in time.

"Matt is a key player for us - as vice-captain, he's a really important guy to have in our dressing room," said Bell.

"It's a little bit disappointing but I believe there is enough time still for that first Test match to get him fully fit and on the field.

"But it gives Jonny Bairstow an opportunity as well to get the gloves on and get out there. On tours like this in the past we've learnt that the more guys that can get cricket as a squad then the better we'll be. But fingers crossed Matty will be right for Brisbane."

On Pietersen, Bell added: "I think he'll be raring to go. We don't know the 11 for this game coming up but I am sure he's in there for selection."

England begin their four-day warm-up match against New South Wales on Wednesday but their preparations were disrupted again as rain forced the cancellation of outdoor training.