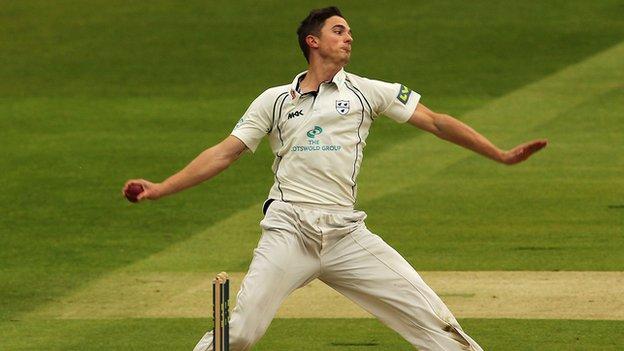 Worcestershire fast bowler Richard Jones has been released from his contract at New Road to join neighbours Warwickshire on a one-year deal.

Stourbridge-born Jones, who still had a year left on his contract, initially joined the Bears on loan in August.

Jones, 27, then suffered an injury in his first net session, denying him the chance to make his Bears debut.

But he now has a further chance to work with Bears boss Dougie Brown and his revered bowling coach Graeme Welch.

"A new challenge will give me the opportunity to push for a place in both four-day and one-day formats," said Jones.

"Warwickshire have been one of the top teams in the County Championship for several years and the chance to work with Dougie Brown, Graeme Welch and a team of top-class fast bowlers is a fantastic opportunity for me.

"I would like to thank the county for their support over recent years and for their help in facilitating my move to pastures new."

Although he took just one Championship wicket this summer, on his only appearance for Worcestershire at Southampton back in April, Jones has taken 133 first-class wickets in 44 appearances during seven, injury-disrupted seasons at New Road - his best return being 38 scalps in the promotion-winning team of 2010.

"In recent times, Richard's inability to force his way into the side has been frustrating for both him and the club," said Worcestershire director of cricket Steve Rhodes.

"While it is never nice to see players leave, Richard feels that a new challenge with another county will be beneficial in order for him to progress in all forms of the game."

"Richard is an exciting prospect and is a very good addition to our squad," said Brown. "He settled in very well when he joined on trial in August.

"His arrival will create even more competition for places amongst a very strong bowling line-up. "