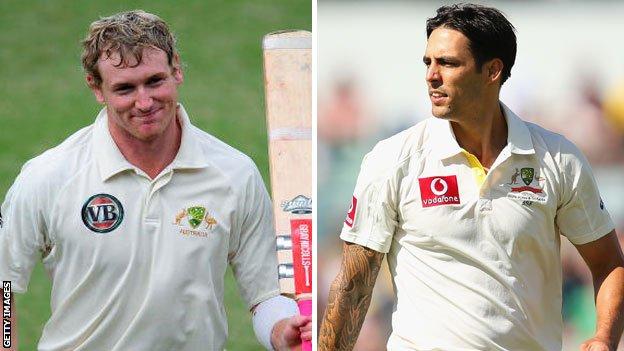 Uncapped batsman George Bailey and pace bowler Mitchell Johnson have been named in Australia's 12-man squad for the first Ashes Test against England.

Left-armer Johnson, 32, was dropped for Australia's 3-0 Ashes defeat in England this summer, but showed good form in the one-day series in September.

Former Australia fast bowler Geoff Lawson: "Whether the squad is strong or not will be determined by how well they play, but for the first time in maybe 18 months, it hasn't taken the selectors long to find the final XI or the final XII.

"Bailey is no great surprise - he had a huge run scoring tour in India in the one-dayers, so the batting is looking as stable as it has for quite a long time.

"Mitchell Johnson has been picked more on his one-day form, like Bailey, but he has bowled quite fast and was a big part of Australia winning a couple of games in India."

The first of five Tests starts in Brisbane on 21 November.

Injured left-arm paceman Mitchell Starc is the only absentee from the Australia XI that played in the final Ashes Test at The Oval in August.

James Faulkner keeps his place, while fellow all-rounder Shane Watson is included despite a hamstring injury that may prevent him from bowling.

Bailey has a modest first-class average of 38.28 from 97 games, but has been a revelation for Australia in the 50-over format, and captains the Twenty20 side.

"We have included George Bailey in this line-up and are excited by what he can offer at Test level," said Cricket Australia national selector John Inverarity.

"George has shown outstanding international form over the past 20 months. He is calm and composed and comes into the squad full of confidence."

After bowling Australia to victory in Perth in the 2010-11 Ashes, Johnson was taken apart by England in Melbourne and Sydney and became a figure of fun among the touring fans as his bowling became increasingly wayward.

He has taken 205 wickets in 51 Tests, but has not played a Test since March, when he failed to take a wicket as India beat Australia by six wickets in Delhi to complete a 4-0 whitewash.

However, he looked back to his best in the one-day series in England that followed the Ashes, clocking speeds of up to 93mph.

"Mitchell Johnson has been bowling impressively in recent times," said Inverarity. "He has good rhythm and is generating good pace."

Australia captain Michael Clarke added: "I said a few days ago, if Mitch was selected in this squad, it wouldn't surprise me in a couple of months' time to see Mitch being man of the series."

Watson, who scored a century against England at The Oval this year, suffered a low-grade hamstring strain while bowling in Australia's final one-day international against India on 2 November.

Should Watson not be fit to bowl, Faulkner could be preferred to Bailey to offer a fifth bowling option.

"We're hoping Watson will be able to bowl. He's progressing very well and he'll certainly be fit to play. But it's nine days to go, so we can't give a definitive answer on that."

Alastair Cook's team are seeking to become the first England side since 1890 to win four Ashes series in a row.

Australia are unbeaten in 24 Tests in Brisbane, their last defeat coming against West Indies in 1988.