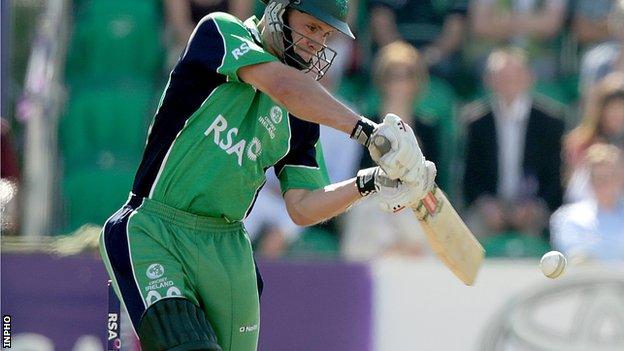 Captain William Porterfield's unbeaten 75 helped Ireland to a six-wicket victory over the Netherlands in their latest warm-up game ahead of the ICC World Twenty20 qualifier in Abu Dhabi.

The Dutch had been restricted to 139-5, with Alex Cusack taking 2-16 while Wesley Barresi top-scored with 50.

Barresi shared an opening stand of 42 with Stephan Myburgh (22) before Max Sorensen (2-31) had Myburgh caught at mid-off by Niall O'Brien.

Ben Cooper, the younger brother of South Australian player Tom, looked in fine touch as he scored an unbeaten 42 from just 29 balls, including two huge sixes, but the Irish impressed in the field.

Porterfield lost opening partner Paul Stirling in the first over of their reply but he and O'Brien put on 70 as Ireland took control.

With seven needed from the final over, Porterfield sent Ahsan Malik's first delivery deep over the mid-wicket boundary to tie the scores, and then sealed the win with a punch down the ground.