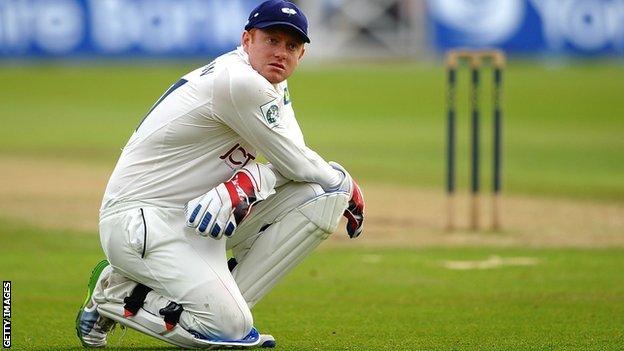 Bairstow, 24, will take the gloves in Brisbane on 21 November if Matt Prior fails to recover from a calf injury.

"Jonny Bairstow will be fine batting at number seven but I would worry immensely if he has to keep in a Test match," Vaughan told BBC Radio 5 live.

"It is crucial for England that Matt Prior does play, as much for his skills as a world-class all-rounder as for his leadership and influence in the dressing room. He is the one England player who does not really have a ready-made replacement in the squad, given Jonny Bairstow's relative inexperience as a keeper. Bairstow's involvement as a specialist batsman in the England set-up has limited his appearances for Yorkshire and he remains something of a work in progress behind the stumps. He has the perfect tutor in England wicketkeeping coach Bruce French, but for him to keep wicket in an Ashes Test with such a small amount of experience would be a big ask."

"I wouldn't put him in the top five keepers in England."

Prior, 31, has played 57 consecutive Test matches for England, having missed the fourth match against West Indies in February 2009 following the birth of his child.

Bairstow, Yorkshire's first-choice wicketkeeper, has played 12 Test matches but is yet to keep in the longest form of the game.

Vaughan, who led England to victory in the 2005 Ashes, added: "I questioned it as soon as the squad was selected.

"I just don't think he's done enough of it to withstand the pressure of an Ashes series keeping wicket."

Bairstow has mainly been used as a specialist batsman by England, keeping in just one Twenty20 international.

Opportunities to develop his keeping with Yorkshire have been hampered by his international commitments, though he has been training with England wicketkeeping coach Bruce French.

"Bairstow is a package that could work in 20-over and 50-over cricket, but in five-day cricket, yes you need someone who can bat, but also to take those important catches," added Vaughan, who played 82 Test matches.

"He hasn't done enough for Yorkshire this summer because he has been playing for England.

"He may have to keep in the hottest of pressure zones, the Gabba, in front of 40,000 spectators. The selectors feel Bairstow is the next best, but I would question that."

Vice-captain Prior led England in the absence of Alastair Cook for their first match of the Australia tour against Western Australia.

However, he suffered the calf injury against Australia A and will miss the final four-day warm-up match against an Invitational XI, which starts on Wednesday.

With 220 Test match victims, Prior is third on England's all-time list of wicketkeepers, behind Alan Knott (269) and Alec Stewart (241).

"The injury to Matthew Prior is a massive, massive concern," added Vaughan. "He's been brilliant for England for three or four years and is the engine of the team.

"Prior is a confidence player, he really likes to be in the middle, scoring runs. He could go into that first Test without any cricket."

Tremlett was a key member of the squad that won 3-1 down under in 2010-11, taking 17 wickets, but he has played only five Tests since then.

"I think it will be Tremlett, but it would be one the biggest acts of faith I have seen on behalf of the selectors for a long time," said Vaughan.

"He was a pivotal member of the Ashes winning team but he hasn't bowled anything near that standard since."