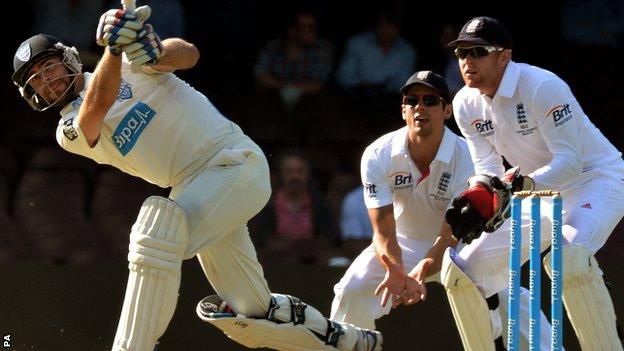 England's bowlers were frustrated on the first day of their final Ashes warm-up match against an Australian Invitational XI in Sydney.

The first Test against Australia in Brisbane starts on 21 November.

England will hope their bowlers pose more of a threat at the Gabba than they did in the second half of the day at the SCG.

"Steven Finn didn't look rhythmic to me; he was down on pace. However, Stuart Broad has found a nice rhythm and bowled really well.

"It's difficult to predict who will get that third seamer's spot. You feel that nobody has staked their claim yet and one good spell could propel Finn or Rankin into the team now."

With James Anderson rested and Chris Tremlett left out, Finn and Boyd Rankin were given the opportunity to stake their claim for the third seamer's spot in England's Test side.

But Finn proved expensive at times in taking 2-79 from 22 overs, and Rankin could not find the right line and length to truly threaten the batsmen as he sent down 20 wicket-less overs for 60 runs.

Their struggles were put into context by Broad's superb performance as the Nottinghamshire paceman took 3-36 from 20 overs.

Broad, however, was quick to deflect criticism from his fellow seamers.

"It was a tricky day to settle into a consistent rhythm because sand was flying up behind the bowlers, but I thought we held it together nicely," he said.

"Boyd obviously extracts huge bounce from his big frame and we all know what Finny can do on the international scene, and of course Tremlett is an experienced campaigner as well.

"So we have a lot of experience in the bowling unit, which is very important on a tour like this because we know that two or three bowlers aren't going to play the whole series. Everyone has to be ready to go."

Bowling a probing line and getting the ball to nip off the seam, Broad dismissed Aaron Finch and Callum Ferguson cheaply before returning to remove Ben Rohrer with the help of a fine catch at backward point by Michael Carberry.

Finn accounted for Kurtis Patterson and opener Ed Cowan, who was dropped by Australia during this summer's 3-0 Ashes defeat in England, for 51 shortly after lunch.

Carters and Nevill batted cautiously before growing in confidence, and 23-year-old Carters, who had a first-class average of just 20.75 before the game, went on to the highest score of his career.

Jonny Bairstow, who was keeping wicket in the absence of the injured wicketkeeper Matt Prior, was tidy behind the stumps on the opening day.

Former England captains Michael Vaughan and Alec Stewart have questioned whether Bairstow has the required level of skill to take Prior's role in a Test, but Broad was impressed by his team-mate.

"He kept really well," said Broad. "He's got a fantastic energy level and he really keeps everyone going each hour of the day.

"So it was good for him to get some keeping in here in Australia in case Matt's calf doesn't come through. But I'm sure he's hoping it will be fine next week."

With some rain forecast for the final two days of the four-day match, England will hope to take the final five wickets quickly on the second day to give their batsmen some time at the crease.

Kevin Pietersen, in particular, will be hoping to find form after having a cortisone injection on his problematic right knee.

Broad is expected to be a target for the Australian crowds after his controversial decision not to walk during the opening Ashes Test of the summer at Trent Bridge.

But he added: "The crowds have been great. They are very appreciative of the cricket that has been played. It might ramp up a bit for the Test series but I think that's expected.

"I've always had this theory that if people are talking about you it means they respect you. I'm reading Alex Ferguson's book he said if the opposition fans are singing about you then that's a very good sign.

"It's something that has stuck in my mind. It's expected over here but all good fun."