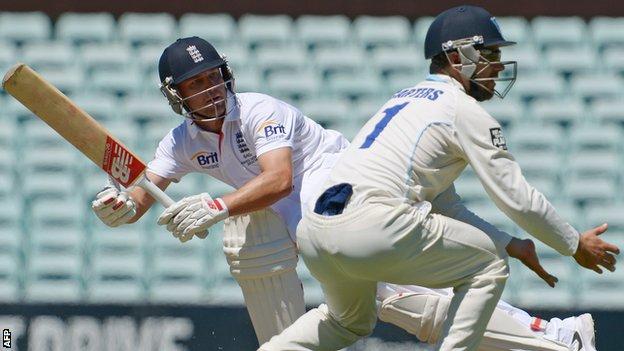 England's batsmen enjoyed valuable time in the middle as the tourists impressed on day two of their final Ashes warm-up game against an Invitational XI.

Steven Finn (5-103) took three wickets in the morning session as the hosts lost their final five wickets for 33 runs to collapse to 304 all out.

It was a timely contribution from Finn, who recovered from a mixed performance on the opening day to stake his claim for a place in the England team for the first Test against Australia, which begins in Brisbane on 21 November.

The Middlesex paceman, 24, bowled with plenty of pace, while also hitting the right line and length; his reward the wickets of Peter Nevill, for 83, and tail-enders Josh Lalor and Nic Bills.

England did all they could do, their only disappointment was Michael Carberry but he might still get another chance in the second innings.

Other than that, Alastair Cook and Jonathan Trott batted well but they will have been annoyed that they didn't get a hundred. You could tell that from their body language when they got out.

Steven Finn took five wickets but it was Stuart Broad who was the pick of the bowlers.

He was given sound support by Stuart Broad (4-37), who struck with a superb outswinger with the first ball of the day to deny Ryan Carters (94) a maiden first-class century, while Boyd Rankin also took a wicket.

England will have been pleased to see Finn in the wickets as they finalise the formation of their bowling attack for the Gabba, but it was the form of their batsmen that was particularly heartening.

Carberry, who struck 153 in the previous tour match against Australia A, scored only four runs before being caught behind.

However, Cook and Trott put on 143 for the second wicket to put England in control.

Trott looked particularly fluent as he struck 14 boundaries in his 105-ball knock while Cook was largely untroubled before, like Trott, he edged behind.

Their demise allowed Pietersen to test out his troublesome knee in the middle, and the right-hander showed no serious ill-effects from the cortisone injection he had earlier in the week.

The 33-year-old scored all around the wicket, being particularly severe on rookie James Muirhead as he lofted the leg-spinner for two sixes before his attacking instinct got the better of him, picking out substitute fielder Daniel Hughes, who took a fantastic diving catch near the boundary.

Bell also looked in good form as he effortlessly caressed the ball around the SCG and it was a surprise when he was dismissed by Muirhead for 35.

Joe Root (26 not out) and Jonny Bairstow, deputising for injured wicketkeeper Matt Prior, saw England through to the close but not without alarm as the latter was dropped at deep mid-wicket before reaching stumps on 11 not out.

Questions may be asked about the quality of the opposition in England's final game before their defence of the Ashes, but they seem to be on course for a morale-boosting win, providing they can wrap things up before rain, which is forecast to affect the final two days of the four-day contest, arrives.

Trott was pleased with the team's preparations and said: "All in all it was a pretty good day. It was nice to spend some time out there with Alastair and Kevin looked as if he played pretty well along with Belly."

Asked about Pietersen he added: "When he first went in the guys were bowling with some good pace and the ball was swinging around. They got it to reverse due to the outfield so it was quite challenging.

Trott was also impressed with Finn and said: "He bowled really well. Obviously Broady [Stuart Broad] was the stand out yesterday but Steven came back with a ball that was still a little bit newish and bowled really well from side on where I was fielding at deep square it looked like he had some good pace.

"Steven is that kind of bowler who he thinks needs to bowl a lot and looks like he found some good rhythm out there."