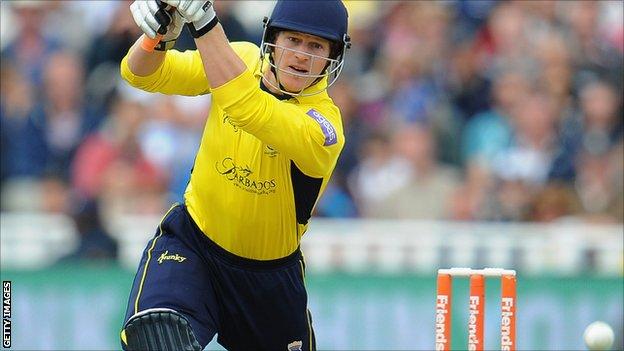 Batsman Jimmy Adams has confirmed he will continue to captain Division Two side Hampshire next term.

Adams, 33, said towards the end of the season he would take some time during the winter to consider if carrying on was in the best interests of the team.

Hampshire failed to gain promotion to Division One this year, an aim Adams held before the season began, ending the campaign in fourth position.

"I feel I can take it on and give it a good go," he told BBC Radio Solent.

Left-hander Adams added he did not regret admitting to how he felt when promotion slipped away, and having had time to reflect, is now relishing a renewed challenge for next term.

"In hindsight it was an honest reflection of stuff," he said.

"With a bit of time to reflect and chat things over with a few people we feel we're moving in the right direction.

"We are planning for next year, looking for an overseas player and T20 options, there are a few new faces coming in, so it's nice to have a break and recharge the batteries."

It will be Adams' third season as captain and he added: "There are some parts that are hugely rewarding and very enjoyable. Whether you are captain or a batsman, there will be times when it is tough.

"There were times at the end of the last year when I couldn't get the balance right between getting away from it and recharging. It is something you learn from. We have a clear idea of how we want to go ahead."