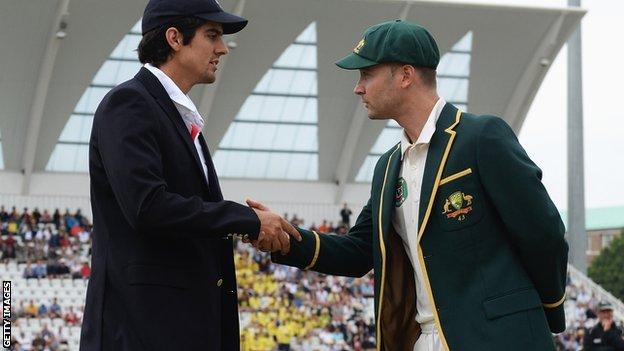 England have travelled to Australia to defend the Ashes they won at home last summer.

With England looking for a fourth successive series victory, the first Test in Brisbane on Thursday begins only 88 days after Alastair Cook lifted the urn at The Oval.

BBC Sport explains the reasons for the swift turnaround, how the series down under will differ from the one in England, and where victory would rank for England.

Why are the teams playing again so soon?

England would usually travel down under 18 months after hosting Australia, but this instant return series is the result of a desire to alter the Ashes cycle.

As a result, both teams went into the most important one-day tournament straight after their biggest Test series.

In 2011, the World Cup began only 16 days after England's final one-day international in Australia.

This issue is further compounded by the fact that the next World Cup is scheduled to be held in Australia and New Zealand in early 2015, soon after when an Ashes tour would ordinarily have concluded.

The altered Ashes scheduling does not end this winter. Australia would usually tour England two-and-a-half years after hosting the Ashes, but they will next visit the UK in 2015, only 18 months after the forthcoming series.

This is to ensure that Ashes series in England remain in odd-numbered years so as not to clash with the Olympic Games or major football tournaments.

From there, England are not scheduled to tour Australia until 2017-18, with Australia returning in 2019.

England won 3-0 at home. Will this series be different?

England were helped to success in the summer by the home advantage of slowish, turning pitches.

"England have two question marks remaining over their final Test line-up with the identity of their third seamer yet to be decided and a slight concern over the fitness of wicketkeeper Matt Prior.

"England will not want to take any risks on Prior but it is my understanding that his calf tear of the lowest grade of severity, and that he should therefore be fit for the first Test.

"It is crucial for England that Prior does play, as much for his skills as a world-class all-rounder as for his leadership and influence in the dressing room."

On these wickets, off-spinner Graeme Swann was the stand-out performer in the series with 26 scalps. James Anderson and the rest of the pace attack found reverse swing in the early part as Australia's batsmen struggled.

The home side were still successful on a greener pitch in Durham, but on the fast, bouncy wicket of Old Trafford they struggled and probably would have lost had it not rained on the final day.

It is likely that England will encounter pacier wickets down under, although they may not be as lively as Australian surfaces of the past.

But former England paceman Steve Harmison said he would be "amazed" if Australia ask for bouncy pitches to be prepared and Cricket Australia boss James Sutherland says the hosts will not look to exploit home advantage.

As well as having their own selection issues to resolve, England will also be facing hosts who are much more settled than in either of the two previous series.

If Matt Prior overcomes a calf injury and Finn is chosen as the third pace bowler for the first Test in Brisbane, then England will field nine men who played in the corresponding game three years ago.

Consistency of selection has been a contributing factor to England's recent success, but they have yet to adequately replace the two other men who played in that Brisbane Test of 2010 and have since retired - Andrew Strauss and Paul Collingwood.

Nick Compton and Joe Root have both been tried as Strauss's successor at the top of the order, with mixed success and, after Michael Carberry's hundred in the game against Australia A, the Hampshire left-hander looks set to be the next man to be given an opportunity.

Finn is one option to take the third seamer's position that was filled for much of the summer by Tim Bresnan, who has since suffered a back injury.

Finn is vying with Tremlett and Rankin, but none of the trio have used the three warm-up matches to make a convincing case for inclusion in the Test side.

Bresnan is with the England squad in Australia as part of his recovery from surgery and Cook said in October that the Yorkshire man may be fit for the first Test, although it is more likely he will be available later in the series.

And what about Australia?

Though heavily beaten last summer, Australia at least left England with greater clarity about their batting line-up in particular.

"Whether the squad is strong or not will be determined by how well they play, but for the first time in maybe 18 months, it hasn't taken the selectors long to find the final XI or the final XII.

"Bailey is no great surprise - he had a huge run scoring tour in India in the one-dayers, so the batting is looking as stable as it has for quite a long time.

"Mitchell Johnson has been picked more on his one-day form, like Bailey, but he has bowled quite fast and was a big part of Australia winning a couple of games in India."

Veteran opener Chris Rogers made a maiden Test century and will be joined by David Warner despite the latter's high-profile disciplinary issues.

Shane Watson scored a hundred at The Oval at the troublesome number three slot, as did Steven Smith at number five, to form a middle order either side of captain Michael Clarke, while the experienced George Bailey's impressive one-day form looks set to earn him a Test debut at number six.

Still, Australia have been able to call on a resurgent Mitchell Johnson, the mercurial left-armer capable of bowling above 90mph.

Johnson has 205 Test wickets to his name but struggled for most of the 2010-11 series. However, he looked back to his best in last summer's one-day internationals and could prove a handful.

Will DRS again be a factor?

Snicko uses soundwaves to try to detect if the batsman has edged a ball, while Hot Spot uses thermal imaging cameras. While there have been instances where a faint edge has not shown up on Hot Spot, it is hoped the two could work together to create a better decision review system

The reliability of the Decision Review System was regularly called into question in England this summer, with Jonathan Trott, Kevin Pietersen and Usman Khawaja some of the batsmen on the wrong end of controversial decisions.

Many of the problems surrounded Hot Spot, the infra-red camera used primarily to detect whether the ball has struck the bat.

In October, inventor Warren Brennan said he did not believe that it would be used, but it has since emerged that Hot Spot may be deployed alongside Snicko and the more established ball-tracking technology.

However, the biggest change that will definitely take place is the number of failed reviews that each team will be allowed per innings.

Previously, both sides were allowed only two unsuccessful reviews for the whole innings. Now, that number of reviews will be reset at two after 80 overs.

How big an achievement would an England victory be?

After suffering eight successive Ashes series defeats between 1989 and 2002-03, England are enjoying their most successful period since the late 1970s and early 80s.

Victory in Australia would give England a fourth successive Ashes series win for the first time since the 1880s and 90s, when they won eight in a row.

Success in Australia would also be the first time in more than 80 years that England have won successive series down under, with the last twin victories coming in 1928-29 and 1932-33, the second of which was the infamous Bodyline tour.

The 2013-14 series also carries a potential statistical significance for both sides. After 67 Ashes contests, England and Australia have won 31 series each, meaning both sides have the opportunity to nudge ahead.