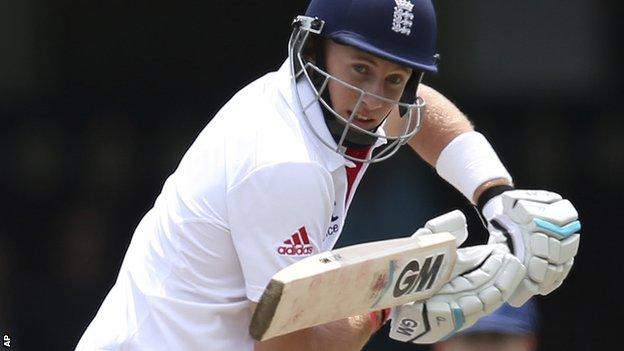 Joe Root hit a classy 75 to put England into a good position on the third day of their final Ashes warm-up match against an Invitational XI.

Opener Aaron Finch blasted 59 for the hosts but Graeme Swann, Stuart Broad, Steven Finn and Boyd Rankin all took a wicket each as England fought back.

"Joe Root played very well and looked comfortable and untroubled. I know the bowling attack wasn't particularly testing but batting at number six at Brisbane next week he has runs in the bank.

"Runs also for Jonny Bairstow, I thought a rather less convincing 48, however if he is going to play in the Test, if Matt Prior isn't fit, he at least had time in the middle.

"However, trouble again with the bowling. There was the opportunity for Steven Finn particularly but he again was erratic and conceded five runs per over, and Boyd Rankin again failed to impress, so whoever the selectors pick for Brisbane they'll do so crossing their fingers."

The first Ashes Test begins in Brisbane on Thursday and, heading into the final day of this match, England will fancy their chances of wrapping up a morale-boosting victory despite the threat of rain at the Sydney Cricket Ground.

Resuming on 302-5, Yorkshire pair Root and Bairstow helped England into a first-innings lead.

Root was struck on his hand early in the day and received treatment out in the middle, but he recovered well to effortlessly bring up his half-century.

At the other end, Bairstow, deputising for injured wicketkeeper Matt Prior, was not as convincing but he battled to 48 before edging behind.

England's tail folded quickly once that partnership was broken, with Root eventually being bowled after aiming an ugly heave across the line.

Rookie leg-spinner James Muirhead finished with four wickets and Nic Bills three for the home side.

The Invitational XI got their second innings off to a flier thanks to Finch, who was particularly dismissive of Finn - the Middlesex seamer's five overs before tea costing 30 runs.

Broad, who took 4-37 in the first innings and was booed when he made his way out to bat earlier in the day, was again England's most impressive bowler and he cut Cowan in half with one which nipped back and took the opener's off stump.

Finn recovered his poise to bowl a similarly unplayable delivery to the fluent Callum Ferguson before Rankin had Ben Rohrer caught behind.

That left Kurtis Patterson (8 not out) and Ryan Carters (1no) at the crease when bad light brought a premature end to play.

Although his glove work has been criticised by former England captain Michael Vaughan, Bairstow told BBC Sport he is happy with his form.

"We've been working hard with [England wicketkeeping coach] Bruce French over the last few weeks, and over the last four years really, so the keeping is coming on, I'm pleased with the way I've kept over the last couple of days here," Bairstow said.

"It has not necessarily been the easiest of pitches, with it being quite two-paced and standing quite close, but the ball is going in well, I'm pleased and I'm confident with the way my work is going and how it's progressing."

Asked about the prospect of replacing Prior behind the stumps in a Test match for the first time Bairstow added: "If it does come along then I don't see any reason why I can't take that opportunity.

"But, at the end of the day, we are hoping for Matt to be fit for all of us with aspirations for England cricket."