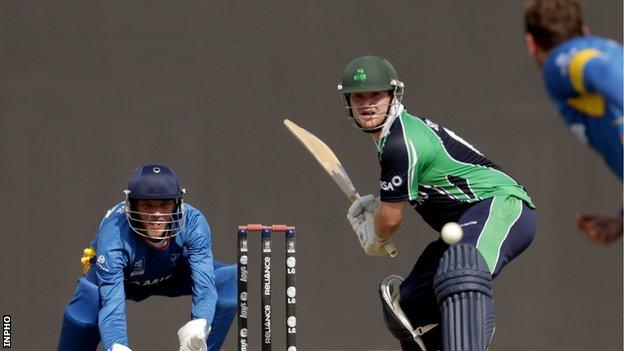 Ireland cruised to a 32-run victory over Namibia in their opening ICC World Twenty20 qualifier in Abu Dhabi.

Paul Stirling hit 52 from 36 balls and fellow opener William Porterfield added 33 as the Irish posted 166-5 from their 20 overs.

Namibia struggled to match Ireland's run-rate and they finished on 134-7, with Alex Cusack taking two wickets and Raymond van Schoor unbeaten on 48.

Ireland are back at the Sheikh Zayed Stadium on Saturday to take on Canada.

Stirling and Ireland skipper Porterfield laid the foundations for a healthy total by putting on 84 for the first wicket in 8.5 overs.

There were also valuable contributions from Kevin O'Brien (28), Niall O'Brien (26) and Gary Wilson (20 not out).

The Irish attack then strangled the life out of the Namibian chase, not conceding a boundary for 50 deliveries between the third and 12th overs, which saw the required run rate rise into double digits.

Ireland, who won the qualifying tournament in 2012, were always very much in charge, despite a number of uncharacteristic mistakes in the field.

Cusack (2-22) was once again the pick of the Irish attack, receiving excellent support from Tim Murtagh and George Dockrell in particular, as Ireland closed out the game to win by 32 runs.

"However, our fielding was under and and we can definitely improve there.

"There's still a few things to iron out and it will take a few matches to be as sharp as we want to be."

Six teams from the tournament will qualify for next year's World Twenty20 tournament in Bangladesh.