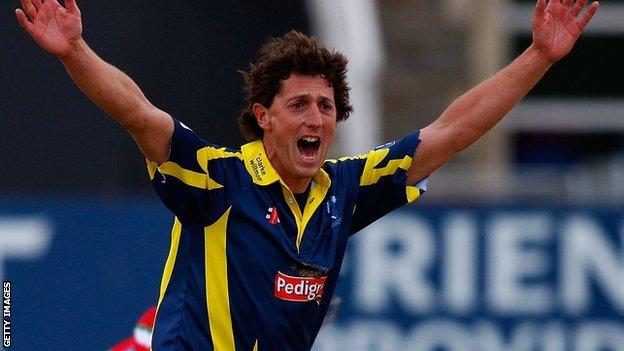 Lewis spent 17 years at Nevil Road before leaving to join Surrey in 2011.

The 38-year-old was released in the summer and, despite Gloucestershire's attempts to bring him back to Bristol, he has now signed for Sussex.

"We had worked out what was a very reasonable price for his services as a senior bowler, a mentor and developing coach.

"Jon always said he would like to come back here one day and help with our young players, so we saw it as a great opportunity.

"Unfortunately, we are not in a financial position to employ him."

Gloucestershire have been working on a tight budget for several years, with their financial focus on rebuilding their ground, and have relied heavily on developing youth players.

"It's a shame because it would have been an ideal fit for us," continued Bracewell. "But the financial situation is unlikely to change in the short term.

"My priority within the budget I was given was to make sure I secured our best young players on long-term deals.

"We have invested a lot in them, right through our academy in some cases. Most of my budget has gone in extending the contracts of players we feel can forge a successful future.

"The next priority is to try and get them as much help as possible."

Medium-pacer Lewis won a Test cap for England against Sri Lanka in 2006, and also played in 13 one-day internationals and two Twenty20 matches for the national team.

In his time at Gloucestershire, he played 218 first-class matches and took 771 wickets.