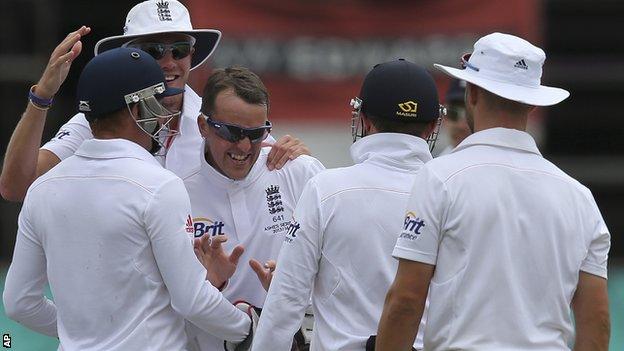 England eased to a seven-wicket victory in their final Ashes warm-up match against an Australian Invitational XI.

Michael Carberry hit a half century and Jonathan Trott chipped in with 38 not out as the tourists cruised to their victory target of 148.

England bowled out the hosts for 261 in the morning session at the SCG.

"We've learned England are some way off where they were three years ago when there were no problems and they went to Brisbane for the first Test knowing exactly what their team would be.

"They have ticked off one or two issues but there is an injury to Matt Prior, they desperately need to have him fit. Michael Carberry opening the batting and Joe Root further down, is that the right decision or not? We'll have to wait and see.

"The big one is the reserve bowler who unfortunately has not really identified himself. Rankin, Finn and Tremlett have all had the opportunity to say 'pick me' but none of them have done that and whichever of those fast bowlers they do play it's going to be a risk."

Boyd Rankin (3-46) and Steven Finn (3-88) staked their claims for a place in England's team for the first Test which starts in Brisbane on Thursday.

However, it remains to be seen whether either paceman has done enough to secure that third seamer's spot alongside Stuart Broad and James Anderson.

Surrey's Chris Tremlett is also in contention, and has been tipped by Australia captain Michael Clarke to figure at the Gabba, but Finn will be pleased with his eight wickets in the match in Sydney despite them costing him almost 200 runs.

The Middlesex paceman, who has won 23 Test caps for England but has not figured since being dropped following the first Ashes Test last summer, continues to show he can get the best batsmen out - his dismissals of international players Ed Cowan and Callum Ferguson highlighting that.

However, England will be concerned about his inability to maintain pressure by keeping things tight.

Broad, who was England's best bowler with match figures of 6-69 from 40 overs, made the first breakthrough on the final day when he bowled Kurtis Patterson.

Finn exposed the home side's tail when he had Peter Nevill caught behind before Rankin bowled with good pace and hostility against the lower order to help bowl out the Invitational XI before lunch.

Graeme Swann took 2-69 from 27 overs as he found a nice rhythm while Jonny Bairstow, deputising for injured wicketkeeper Matt Prior, finished with seven catches in the match as he performed admirably behind the stumps - defying his critics with a tidy and energetic performance.

With the prospect of rain in the afternoon, England needed to score quick runs if they wanted to win the match and they lost skipper Alastair Cook for 21 shortly before the players were forced off the field for a lengthy rain delay with England 40-1 from 12 overs.

However, opener Carberry (50) was fluent as he led the run-chase with some stylish batting before becoming rookie leg-spinner James Muirhead's second victim when he holed out to substitute fielder Daniel Hughes.

Kevin Pietersen (six) went cheaply but Bell (33 not out) helped Trott see England to their target with relative ease.

The quality of the opposition at the Sydney Cricket Ground might not have been the best, but England can be content with a convincing performance in which everyone contributed.

The only question marks ahead of the first Test now appear to be over Prior's fitness and who will take the final bowling spot in the four-man attack.