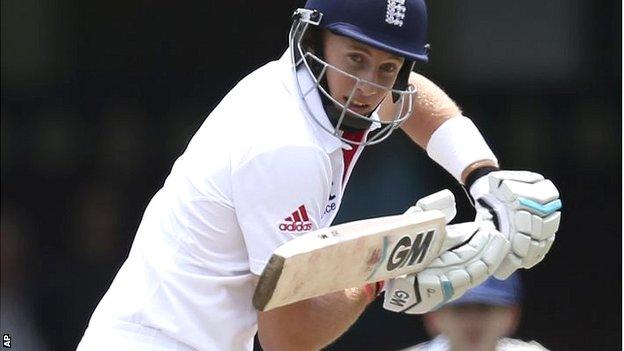 England batsman Joe Root says he has no qualms with dropping to number six.

The 22-year-old Yorkshireman began his Test career at number six in India last year but opened in all five 2013 Ashes Tests in England, making 180 at Lord's.

Hampshire left-hander Michael Carberry is set to open in Thursday's first Test after playing in all three tour games.

Root said: "I just love playing for England regardless of where it is in the line up. To get to put on the shirt and cap, that's the main thing for me."

"We've learned England are some way off where they were three years ago when there were no problems and they went to Brisbane for the first Test knowing exactly what their team would be.

"They have ticked off one or two issues but there is an injury to Matt Prior, they desperately need to have him fit. Michael Carberry opening the batting and Joe Root further down, is that the right decision or not? We'll have to wait and see.

"The big one is the reserve bowler who unfortunately has not really identified himself. Rankin, Finn and Tremlett have all had the opportunity to say 'pick me' but none of them have done that and whichever of those fast bowlers they do play it's going to be a risk."

He scored 339 runs at an average of 37.66 opening in last summer's Ashes - compared to his overall average of 40.15 from 11 matches - but only reached 30 in three of his 10 innings at the top of the order alongside captain Alastair Cook.

Carberry, 33, has played only one Test, in Bangladesh in March 2010 when he made 30 and 34, but he made 78 in the opening tour match, added an unbeaten 153 in the next against Australia A and 50 in the final warm-up against a Cricket Australia Invitational XI.

"He's played exceptionally well on this whole tour so far he's got some really good scores together and it's really pleasing to see him take his chance," said Root.

Having seemingly decided on their batting order, England have to choose a third pace bowler to supplement James Anderson and Stuart Broad.

Chris Tremlett, 32, who took 17 wickets in three Tests on England's last Ashes tour in 2010-11, captured one wicket in the first two tour games.

Steven Finn, 24, who lost his place in the Test team after the first match of last summer's series, has taken 11 wickets in two tour games, while uncapped former Ireland seamer Boyd Rankin, 29, has claimed seven in two matches.

"The competition is very healthy at the moment," said Root, after England's seven-wicket win over the Invitational XI in Sydney.

"It's great to see both lads putting in strong cases. In a five-match series there could be injuries so if blokes put in good performances it gives them a lot of confidence if they get called up later.

"Any win is going to put a lot of confidence in the side. Everyone has contributed really well in all departments. We are very happy as a camp."