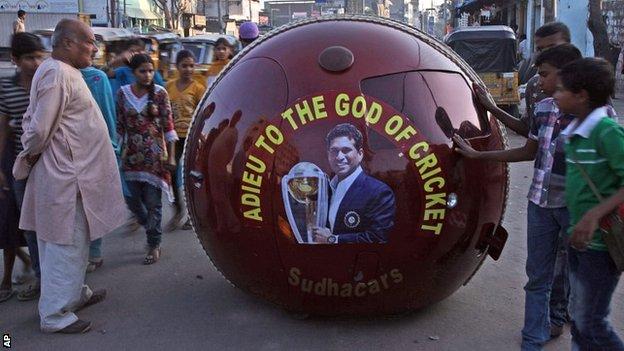 Today, it witnessed the end of an era - an era defined by the man who is the epitome of cricket in this country and is seen as a god to the billions of hearts that hold him. It left all of us with a feeling of emptiness.

The build-up to Sachin's 200th Test was one that had many a heart racing.

When the day finally came, the world watched with bated breath as the 'Master Blaster' made his way out onto the ground for the last time in his life, watched for the very first time by his mother Rajni, in a wheelchair, and by his childhood coach Ramakant Achrekar.

He did something I have not seen him do before. He bent down, touched the pitch and brought his glove up to his chest - a mark of respect, a prayer maybe? He played with the grace and finesse with which many a generation of cricketing fans have grown to identify him.

The almost unanimous view at the end of play on Wednesday was that he was playing like the Sachin of old.

The rasping cover drive and the paddle sweep, the flick off the pads and nudge backward of point were all on display. As a leading daily newspaper said on its masthead - Thursday was 'Bharat Bandh' - the day when the nation would come to a standstill anticipating Sachin's 101st international century.

He continued to play with consummate ease, but the symphony was interrupted by West Indies spinner Narsingh Deonarine in combination with his captain Darren Sammy, who kept one promise he had made to the Indian people. He had said "I will do all l can to break Indian hearts" before the series began.

Some Indians even cheered for the West Indians in the hope that the rest of India's batting would fold, thus giving them the opportunity to watch Tendulkar bat just one more time.

They had to settle for the two overs that his captain entrusted him to bowl, and seeing him on the field. The day seemed to slip away as the West Indian batsmen once more failed to turn up and suddenly it was time to bid adieu to the legend and look reality in the face.

The stadium resonated with loud cheers of "Sachiiiin… Sachin", emotions were high and it took moments to realise that one would never see Tendulkar in whites on the park being the true patriot that he is.

Lumps in throats became the order of the afternoon as the enormity of the occasion began to seep in.

Rahul Dravid, a man with whom Tendulkar spent eons batting together on grounds the world over, was seen wiping a tear. Another ex-India skipper Sourav Ganguly tried hard to keep his emotions in check behind a pair of blue shades. And former India star Ravi Shastri, now a TV commentator, seemed so affected that he called Sammy India's captain and asked one of the presenters to "facilitate" rather than "felicitate" Tendulkar.

As he stood in the middle of the ground amidst the loud cheers, Tendulkar thanked all those who helped him become the man that he is today.

To say goodbye to the "22 yards that have been his life for the last 24 years" could not have been easy for him, as for the first time many saw the emotional side of the national icon.

He bowed out of the game with the same understated grace and humility with which he has played all these years. He brought the crowd to tears when he spoke of his father and told the world "every time I raised my bat heavenwards, it was for him. I miss him".

I think everyone would agree that this tiny colossus has done his father proud many times over.

At the end of that emotional speech, which came right from the heart, he started on the lap of honour.

The honour was really for everyone else, including me, just to be there and as we pushed a collective tear back, he was carried on the shoulders of his last captain Mahendra Dhoni and the likely successor Virat Kohli.

As his wife Anjali, daughter Sarah and son Arjun - still in his whites from ball boy duty, just like his father 26 years before - followed him around the ground, they must have felt the collective emotion engulf them.

As Tendulkar said to the team on the morning of the Test: "We are all privileged to be playing for our nation and serving its cause. I am sure you will carry that forward and play the game the way it is meant to be played."

In the final analysis, it would seem that for Tendulkar, playing cricket was a higher cause and it is perhaps fitting that just as I write this, we have heard that he is to be honoured with the Bharat Ratna, India's highest civilian award.