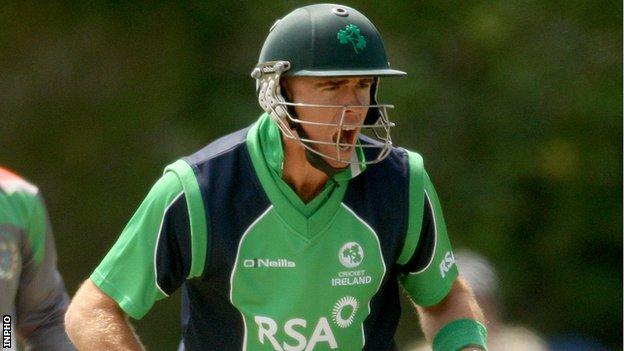 Ireland were forced to fight all the way before clinching a two-run win over Canada in their second ICC World Twenty20 Qualifier match in Abu Dhabi.

Trent Johnston's unbeaten 39 was Ireland's top score as the tournament favourites set a target of 168.

Max Sorensen then took wickets with the first two balls of Canada's reply.

A stand of 125 for the third wicket between Ruvindu Gunasekera and Ashish Bagai saw Canada recover but they fell three short of victory.

Going into the final over, Canada required 14 to win and they were in with a chance when Jimmy Hansra hoisted Alex Cusack for six off the third ball.

But they fell just short of victory, finishing on 166 for three as Ireland made it two wins out of two.

Having lost the toss and been put into bat, Ireland - who began with an easy win over Namibia on Friday - saw wickets fall regularly during their innings, Hansra the pick of the Canada bowlers with figures of 2-24.

Sorenson ensured Canada got off to the worst possible start in their reply when he trapped Hiral Patel lbw with the first ball of the innings before sending Rizwan Cheema back to the pavilion with his next delivery to leave Canada 0-2.

But Bagai saw off the hat-trick delivery and went on to top-score with 67 not out, supported by Gunasekera, who scored 65.

Six teams from the tournament will qualify for next year's World Twenty20 tournament in Bangladesh.