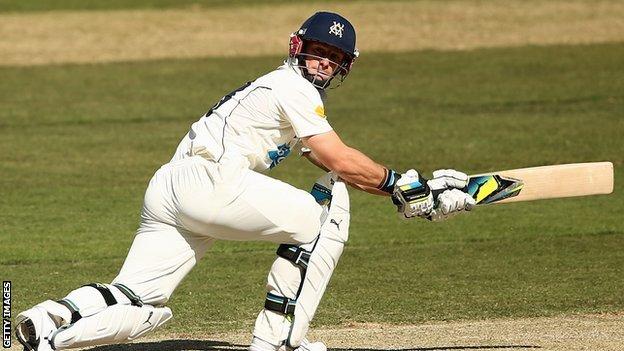 Wicketkeeper Matthew Wade has been suspended for one game by Cricket Australia for tampering with the pitch during a Sheffield Shield match.

The Victoria captain was reported by the umpires for his actions while batting during their win over Tasmania.

He will miss their next Shield game against Western Australia, which coincides with the first Ashes Test.

Wade, 25, has played 12 Tests and was reserve keeper to Brad Haddin on Australia's recent tour of England.

A Cricket Australia statement read: "Both umpires considered the change to the pitch, which resulted in the creation of a long valley within the protected area, had been created by means other than natural wear and tear."

Wade, who scored 119 in the match, denied the charge, but the guilty verdict was upheld by match referee Daryl Harper, the former Test umpire. Having also forfeited 50% of his match fee, Wade has 48 hours to lodge an appeal.

He made his international debut in 2011 and broke into the Test team the following year, though Haddin regained his place for the Ashes in England.

But should any injury befall Haddin before the first Test, it would present the Aussies with a selection poser behind the stumps, with Wade serving a domestic suspension.