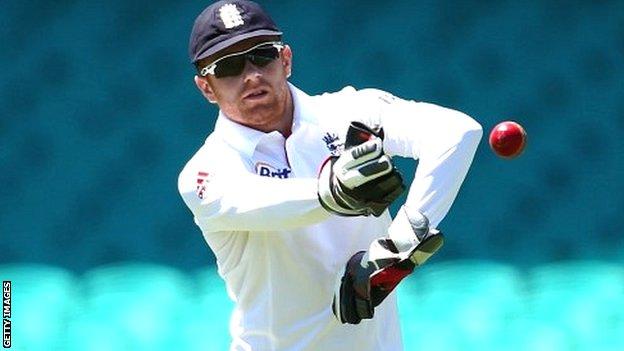 England's James Anderson is confident Jonny Bairstow would prove an able deputy if wicketkeeper Matt Prior is unfit for Thursday's first Ashes Test.

Prior has played 57 successive Tests but is struggling to be fit for Brisbane because of a calf injury.

He missed the final warm-up match in Sydney, with Bairstow deputising.

"He did very well, got some runs and kept brilliantly," Anderson told BBC Sport. "If Matt's not fit, Jonny will be a more than capable replacement."

Yorkshire's Bairstow, 24, has made 12 Test appearances as a specialist batsman since his debut against West Indies in 2012 but is yet to keep wicket at the highest level, with Prior having been behind the stumps in every Test since the spring of 2009.

In Prior's absence, Bairstow took seven catches and made 48 as England beat a Cricket Australia Invitational XI by seven wickets in their final pre-Ashes fixture.

Two of England's three warm-up matches were badly affected by rain and spinner Graeme Swann admitted that preparations had not been ideal for the tourists.

"The bowlers more than anyone need a bit of rhythm to get into the swing of things," he told BBC Radio 5 live's Not Just Cricket.

"That's been difficult because of the disruptions of the weather but I think, moving into the back end of the week at Sydney, everybody was more or less there by the end of that game.

"The reserve bowler unfortunately has not really identified himself. Rankin, Finn and Tremlett have all had the opportunity to say 'pick me' but none of them have done that and whichever of those fast bowlers they do play it's going to be a risk."

Aside from Prior's injury, the remaining selection debate appears to be over the third seamer to supplement first-choice pair Anderson and Broad.

With Tim Bresnan injured and not yet part of the official squad - although hopeful of a return for the second Test - Chris Tremlett, Steven Finn or uncapped Boyd Rankin will be chosen at the Gabba.

Tremlett, 32, who took 17 wickets in three Tests on England's last Ashes tour in 2010-11, captured only one wicket in the first two tour games.

Finn, 24, who lost his place in the Test team after the first match of last summer's series, has taken 11 wickets in two tour games, while former Ireland seamer Rankin, 29, has claimed seven in two matches.

England bowling coach David Saker revealed that the final decision is likely to be made on who bowls best in the nets leading up to Thursday's match.

"Sometimes you haven't got enough game time or enough game form to say that's where we are going to go, those decisions are made all the time. You'd rather not have to do that but that's the situation," explained Saker.

"It's really good that positions are up for grabs, it keeps everyone on edge, it makes them competitive, it makes our training sessions ultra-competitive and it's a real good positive thing."