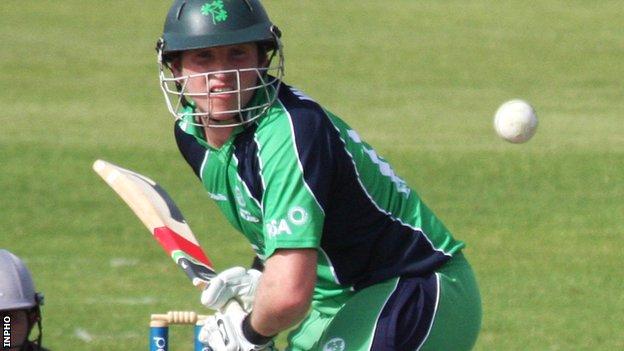 Ireland made it three wins from three matches at the World Twenty20 Qualifier with Sunday's thrilling five-run victory over hosts UAE in Abu Dhabi.

George Dockrell and Max Sorensen each took two wickets as the UAE were bowled out for 133 with one ball remaining.

Ireland top Group A and they will play the USA in Abu Dhabi on Wednesday.

After the Irish won the toss, openers William Porterfield and Paul Stirling were straight on the attack against Manjula Guruge and Shadeep Silva, Stirling in particular sore on Guruge who leaked 21 runs in his first two overs.

Kevin O'Brien joined his skipper in the middle but disaster struck for Ireland soon after when Porterfield came up short trying to scramble a quick single and was run out for 18.

O'Brien was joined by Wilson as the batting side tried to consolidate and this pair went on to do a superb job for their team.

O'Brien was given a life by the home side on 22 when Saqib Ali dropped a regulation catch and he made them pay as he and Wilson went on to add a 92-run stand that only ended in the final over.

The reply started in a blaze of action as Muhammad Azam clubbed Tim Murtagh's second ball for six and was then out seconds later trying to repeat the dose.

Shaiman Anwar and Khurram Khan picked up the mantle from there and this pair comfortably took the hosts ahead in the contest as Ireland's bowlers struggled.

The introduction of Stirling and Sorensen into the attack gave the Irish renewed hope however, Sorensen finally breaking the 53-run partnership by removing the dangerous Khan for 35.

The game swung back Ireland's way when Stirling did for Anwar in the next over and with runs drying up, Sorensen dismissed Saqib Ali to leave the Emirates 72-4.

Swapnil Patil was next to go, falling to Dockrell for 14 after he and Rohan Mustafa had added 21 to the home side's cause.

Mustafa and Muhammad Shafiq took the score on to 115 before Dockrell tempted the latter into a big hit which was snaffled by Stirling on the boundary and with time running out Ireland had edged back in front.

The 19th over saw the contest really swing - Amjed Javed clubbing Cusack for two big sixes before the bowler gained his revenge by tempting him out just enough for keeper Gary Wilson to send him packing.

Going into the final over, the home side needed nine to win with three wickets in hand and Porterfield threw the ball to Johnston who has rarely let Ireland down in his 192-cap career, and proved just the man for the job.

Johnston's steady stream of yorkers saw UAE getting themselves into an almighty tangle trying to claw back the deficit and they lost two of their last three wickets to frantic run outs before Johnston cleaned up number 11 Guruge first ball to send the Irish top of the group.