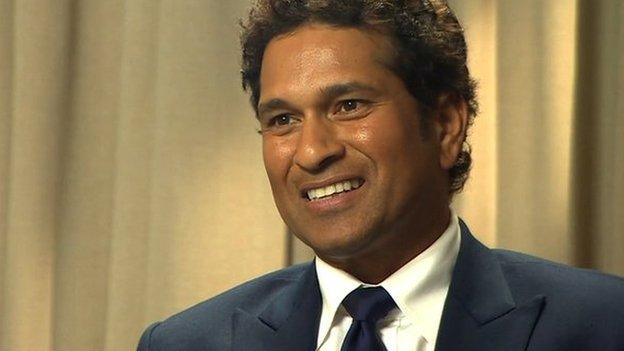 Sachin Tendulkar is regarded as a living god in his native India and his unrivalled feats in cricket place him arguably as the greatest player in history.

In a 24-year international career, he played 664 international matches, scoring 34,357 runs and making 100 centuries. He scored almost 2,500 more Test runs than the next most prolific batsman, Ricky Ponting.

Following his retirement after India's innings victory over West Indies on Saturday, it was announced he will receive the Bharat Ratna, India's highest civilian honour.

Here, the 'Little Master' discusses holding back tears, family, life after cricket, and what it's like being worshipped by a billion people.

After 24 years my body is complaining. It is not easy to wake up every morning and feel that your body is fit and fine. There are aches and pains.

"In the early years of his career, Tendulkar brought solace and consolation to a divided nation by the sheer quality of his batsmanship."

There comes a time when your body says it's had enough of stresses, and I want to relax a bit. It was becoming an effort.

It was a strong message that now is the right time to move away from cricket.

On the reaction to his retirement

When I took the decision to retire, I didn't think the reaction would be like this. This script was written by the Almighty.

I didn't plan all this - it just happened. It is something that will stay with me all my life. I know there are certain things I can't do in India that a normal person can do. But then it is a package deal.

You can do certain things, you have privileges, but on other side there are things you can't do. Given a choice, I wouldn't settle for anything else. It has been fantastic.

On his final Test

When I went out on the wicket I realised that for the last time I will stand in a packed stadium as part of an Indian team.

I was really emotional and couldn't control the tears knowing I will never again have a cricket bat in my hand playing for India.

"The stadium resonated with loud cheers of 'Sachin, Sachin'. Emotions were high and it took moments to realise that one would never see Tendulkar in whites on the park being the true patriot that he is.

"Lumps in throats became the order of the afternoon as the enormity of the occasion began to seep in."

It all happened very fast. Walking back to the dressing room, I didn't want to be rude, but I couldn't look up when shaking hands because I was in tears and I didn't want anyone to see my face that way.

My mother was in the crowd for the first time and she was extremely happy. Earlier, I thought she might come, or she might not come because it was a little difficult for her to travel. It was the only reason why I requested that the BCCI play the match in Mumbai.

After witnessing the first day, she sat for most of the time, but I was worried she might not be able to sit for much longer.

For safety reasons, I requested we had a guest house for her, but she preferred to sit and watch each ball played. It was so special when I saw her in the president's box and I could see in her eyes what it meant to her.

On what cricket means to him

Those 22 yards has given me everything I have in my life. Whatever I have today is because I spent time between those 22 yards. It is like a temple for me.

Any time I go to bat I touch the wicket and take the blessings. I just thank cricket for everything I have in life.

The beauty about my family is they never lost balance. Whether it is a 100 or 15 runs, it didn't matter - my mother and father always had encouraging words.

I was able to perform well since my school days because balance was always maintained at home. Nobody got carried away with my good performances.

Like any other Indian family, we used to buy packet of sweets and offer them to the Almighty, thanking the Almighty for everything happening in my life.

That process has continued. Even yesterday, my mother told me I have kept sweets in front of God. That continues and it will never stop. It is something I've learned over years from my parents.

On the next generation

I have really enjoyed being part of the team. It is a joy to work with them and be part of the same squad. It is not that whatever I say is 100% correct.

If you are prepared to understand what they tell you then you become a better student of sport. That process will continue until I stop breathing.

"It was no dream debut. Revisionist history would be an insult to a genius.

"But there was enough evidence in Karachi that November day in 1989 to suggest that Sachin Tendulkar might be different."

If you are prepared to learn, you will learn. I share my experiences and observations on their batting.

It is fun, but I've always done that, not because I'm the most senior player - even when I was the most junior player I still did it. It is about talking and breathing cricket - no matter what stage of life you are in.

It is a nice thought to train a new generation of Sachin Tendulkars. I will definitely be involved in cricket.

I would like to help the next generation and share my thought and be involved with cricket. Even before I retired, I spent time with youngsters; I just didn't make it public.

I like to interact with players. It's nice to share knowledge and sometimes in understanding their problems it teaches you more about the game.