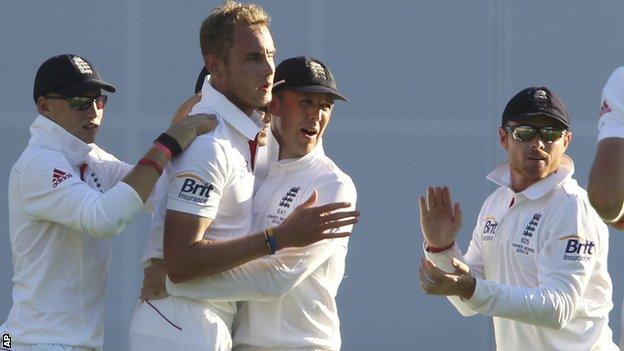 Five wickets from a fired-up Stuart Broad gave England the upper hand as Australia struggled to 273-8 on a seesaw opening day of the Ashes.

The home side had been reduced to 132-6 in the middle of the afternoon before a seventh-wicket partnership of 114 between Brad Haddin and Mitchell Johnson dragged them back into the contest.

But Broad, who had taken every one of the first four wickets to fall, returned with the second new ball to dismiss the aggressive Johnson for 64 to end the day with figures of 5-65 from his 20 overs.

James Anderson chipped in with two wickets in a typically probing display and Chris Tremlett with one as Australia failed to cash in on a pitch offering minimal assistance to the bowlers.

Only Haddin, unbeaten on 78, Johnson and, earlier, David Warner (49) had made the most of the benign conditions.

Having lost the toss on a searing Brisbane morning England will be delighted to go into the second day in such a strong position.

Their bowling was tight and their catching faultless as Australia lost four wickets for 29 runs either side of lunch to cede the advantage they had established in the first hour and a half.

Broad, set up as the villain by the local media in the phoney war before the series, was booed as he took the ball for his opening over and cheered wildly when he delivered a no-ball first up that Warner pulled for four.

But he silenced the boisterous Gabba crowd when he had Chris Rogers caught at gully off one that climbed off the pitch, and after Warner and Shane Watson had settled in with relative comfort for the next hour, then had Watson (22) caught at second slip by Swann as he hung his bat out to a delivery he should have left.

Lunch provided the sole respite for the beleaguered home side, so bullish in the build-up but fragile once again as soon as pressure was applied.

Skipper Michael Clarke went in Broad's first over after the interval, fending a short one to Ian Bell at short leg for just one to reduce his side to 73-3, and Warner handed Broad his fourth when he slapped another short one straight to Kevin Pietersen at extra cover to fall one short of his half-century.

Broad, understandably, was relishing every second, and when Anderson foxed debutant George Bailey with a delivery that moved away enough to take the edge for three Australia were in danger of collapsing completely, just as they did repeatedly in the corresponding series in England last summer.

Steve Smith flourished briefly with his customary aggression, rattling along to 31 before he became Tremlett's first Test scalp since July 2011 when he edged into Alastair Cook's midriff at first slip.

Three years ago England had reduced Australia to 143-5 here in Brisbane, only for the home side to recover to 481 and take a substantial first innings lead.

On that occasion a Haddin century had done much to repair the early damage, and it was the wicketkeeper - in his 50th Test - who once again began to bolster the fightback in alliance with the recalled Johnson.

At first slowly, and then with increasing ease against the old ball, Haddin and Johnson dragged Australia away from the abyss and towards a competitive total.

Haddin went to his half-century off exactly 100 balls with a single off Root, and Johnson joined him with the help of a pair of lofted sixes off Swann as the partnership went past 100.

Runs came quickly, and it was a relief to England when Broad found an inswinger to the left-handed Johnson to clean bowl him.

Anderson then induced a nick from Siddle as the shadows lengthened to leave England with the advantage going into Friday's second day.