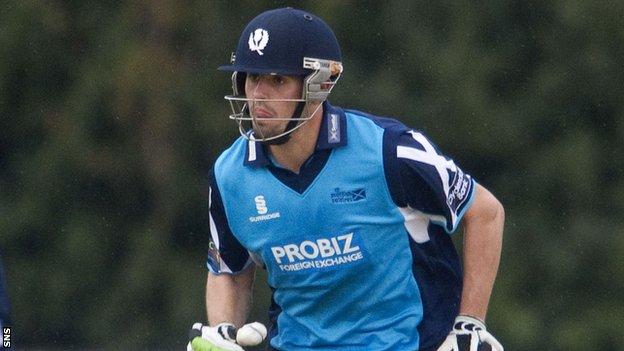 Chasing a total of 137 for seven, Scotland reached 138 for the loss of just two wickets, with Calum Macleod top scoring on 82 not out.

Captain Kyle Koetzer was also unbeaten on 20, while Matt Machan made 28 from 19 balls.

Having lost their opening matches against Bermuda and Afghanistan, the Scots face Kenya on Tuesday.

Nepal, who have yet to reach a World Cup or World Twenty20, had won their first two matches and now sit on four points, along with four other teams in Group B.

Scotland join Kenya on two points, with winless Denmark propping up the section.

Binod Bhandari (28) and Paras Khadka (27) were the only batsmen to trouble the Scottish attack as Gordon Goudie and Safyaan Sharif each took three wickets.

Opener Richie Berrington was stumped for five but his partner MacLeod was in the mood, hitting three sixes and five fours as he steered Scotland to a vital victory.